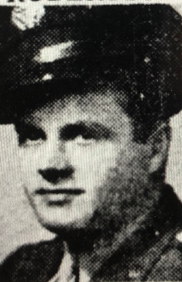 On July 7th the Regiment moved to an assembly area in the vicinity of La Gosselinerie  preparatory to passing through the 315th Infantry and continuing the attack to the south.  At this time, the Regiment, depleted by casualties and demoralized by incessant artillery fire, could not be termed the effective combat unit it had been on the march to Cherbourg. They continued inspired only by the highest kind of courage. The men had seen their comrades fall in two abortive attacks on fortified positions. They had little hope of encountering any other kind of resistance, and as they launched into this third attack in a column of battalions through the 315th Infantry, past the little village of Montgardon, over Hill 84, was again received by heavy enemy artillery fire. They moved over the top of the hill and down the slope beyond and were counterattacked by enemy tanks and infantry.  At Concentration 56 they were stopped, and support from our own tanks and artillery could not get them farther forward than the hard-top road leading from La Surellerie to Biemont.

Night fell with our troops still in this position, and the next day (8-JUL) the enemy opened up with a murderous artillery fire, rendering the continuance of the attack impossible. However, throughout the entire day the attacking units maintained their positions, and the artillery duel continued.

He was initially buried in France and later returned to St. Charles.  Paul Frederick Feldmann is buried in St Peters Cemetery in St Charles MO.

Paul is honored and remembered at the St. Charles County Veterans Museum.