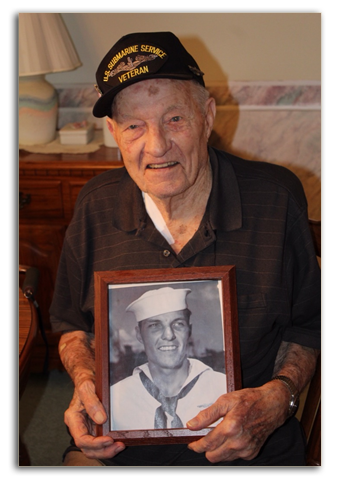 Paul Sebacher joined the Navy in January of 1943.  He twenty years old, 6’2” and 160 pounds.  Paul spent most of his first-year training.  A trainer encouraged Paul and his group to volunteer the submarine service.  He said it was good duty.  Paul said, “I don’t know if I’ve ever seen one.
I had to go somewhere, and I found out you had to qualify for submarines.  I said, while I’m here I might as well go for the best.”

The trainer said, “well, it’s good duty and besides it pays much more than you’re going to get on the other scale.”  So Paul went into the submarine service.  It started with finding out how to shoot torpedoes, how to start the diesel engines and all of that stuff, section by section of the submarine.  When you qualified, the senior officer had to okay it and that’s when you got the rate.

The only time Paul was ever seasick was when he first left for Pearl Harbor on a tugboat.  The tug was pulling a 5000-foot cable pulling a barge loaded with ammunition.  The cable made the tug ride up and down over the waves.  That was all the way to Hawaii and Paul threw up the whole trip.

Paul said it took him about two weeks to find where everything was on the ceiling.  “I was a Seaman then.  When you are on a submarine, you are cross trained on other jobs.  It took you more time to train, the education itself.  You had to stand on the bow planes, look through the periscope, everything in the maneuvering room.”

I think we were out on one patrol for 72 days and I never saw the sun.  I was inside the submarine the whole time.  Once in a while they let you go up and stand lookout.  So it was my turn.  I went up there (there are 360 degrees on a compass or circle) and I said I saw something I think it was smoke which you’d see in the distance over the horizon.  I sent back a report saying the smoke was 365 degrees.  They said, there is no 365 degrees.  The next thing I know, I was down in the sub again.  They asked, what do you see at 365 degrees?  They didn’t shut up!

We had to avoid torpedoes from Japanese submarines, also airplanes dropped four bombs on us, which missed.  I went through the canal over there (off the coast of Japan) and got to see the Emperor’s (Hirohito) Palace.  We had to wait until it got dark, to get back out.  The water was only about 100-200 feet deep, so we sat on the bottom.  The Japanese dropped over 200 depth charges hunting for us.  They knew we were in that channel (Editor’s note:  This was on the second war patrol on June 2, 1944).

Paul had several skippers on the Picuda.  After the end of the second war patrol, Raborn was replaced as skipper of Picuda by Commander Glynn R. Donaho (1 patrol).  Paul describes Donaho as a hot one.  Back then we had air torpedoes (Mark-14 steam turbine with compressed air as the propellent).  The torpedoes were plagued with many problems.  I shot 5 of them at a Japanese ship and they all crapped out.  A couple of them bumped on the side (of the enemy ship) but never went off.  This was when they were just converting over to the electric which had a 90-horsepower single phase motor in there.  I was mad because I was supposed to be a hot shot.  A good man on shooting (torpedoes).  We got the electrical ones when we went back in.  We turned around and went right back out again.

For the fourth patrol Commander Evan T. Shepard relived Donaho (3 patrols).  There was a lot of down time on the boat and he drew blueprints of the boat.  Paul also found time to whittle a model of the USS Picuda.  We didn’t bath a lot, so that’s why they called them “pig boats”.  If we took a shower, we bathed in salt water which wasn’t very good.  Only the Captain and cook were allowed to bathe in fresh water.

We ran on surface whenever we could, charging the batteries.  We heard Tokyo Rose giving her speeches saying, the Picuda is sunk!  I don’t know who is on it, but it was sunk.  We were sitting there listening to it (her).

On one patrol we picked up one Jap.  There was two of them and we were going to keep them as prisoners.  One, he wouldn’t come.  He said, no, no no!  The one we picked up was saluting.  As he was walking through the boat, we made him bow down to the American flag. We kept him in a little storage closet.  He would get out to where we ate.  We kept sugar, salt and pepper on the table.  And we couldn’t keep his hand or mouth out of the sugar bowl.  He ate it like it was just beautiful.  They didn’t have sugar in Japan at that time.  We pulled in to one of the islands (Majuro), there was a sub tender in there and we turned him over to the Marines.  We were told he jumped out of the boat, and they shot him to death.   I said, how true is that?  I think they just didn’t want to put up with him.  (Editor note:  The log book states on August 21, 1944 they estimate that saw considerable wreckage and 8 survivors or more.  One accepted their offer of rescue).

We picked up four airplane pilots (crewmen) that had crashed from a bombing run.  (Editor note:  The log book states on May 6, 1945 five B-29 crew members were transferred from USS Scabbardfish).

Paul said that he thinks he was on every island in the Pacific.  They’d often join three subs together (Wolfpack) and that’s when we were cleaning up pretty good.  We’d coordinate our attacks and we cleaned them out for a while.  We had a schematic where their floating mines were at.  We shot some boats in the Japan area.  We were pretty effective.

When we were being depth charged, we’d go down below 150 feet.  All the Japanese would make/set their depth charges at 150 ft.  As long as the depth charge didn’t go (explode) underneath the boat.  That’s what blew you up.  The lowest we went was 535 feet.  The Picuda was classified as a 300 ft boat.  We had a couple of doors around the mess hall that weren’t water tight.  The depth warped the boat enough that we couldn’t swing the door shut.  It left a few places on the hull of the boat where it was dented in because of the pressure.  It was nearly 44 pounds of pressure at 100 feet!  We were at five hundred and something.  And you could hear the thing creaking.  That’s as deep as we went.  Many people say, being depth charged is very frightening.  Paul said, it didn’t bother me.

Aboard ship we had a radioman.  He’d turn blue and his eyes sunk back into his head.  Sometimes he got sick, he looked terrible.  The minute we pulled back into port to resupply ourselves he just disappeared.  I think they throwed him overboard, really.  He was gone!  We took one guy out because after being ashore for three years, he had to get one-year sea duty.  He was scared to death.  He said, don’t mind me shaking, I wasn’t planning on being out here.  But he was pretty good.

It was unusual to not transfer off during time in submarines.  Usually a submarine had a combination of new and experienced crews.  I think the reason I never got transferred off the submarine, was my dad taught me how to cut hair.  I had the skipper come up to me and I said, how come guys get sent back after each war patrol, they rotate them, and I’ve been there three war patrols and you aren’t even planning on sending me back.  He stood there for a minute.  He said, I want to tell you something, you isn’t leaving.  Nobody else can cut hair.  I insist on everybody having their hair cut.  When we went back to Hawaii, we stayed at the Royal Hawaiian which was first class.  Submariners were treated very special.  It was just usually for two weeks and then we’d be back out on another patrol.

Regarding his time in service and six patrols on the Picuda, Paul said, “It was exciting.  The good part is, I came back!  I cut hair on six patrols, I made six hundred dollars.  I didn’t charge nobody.  They’d throw a buck in there or a quarter in there and say, I’ll pay you when we get back.  I didn’t spend any of it.  I just kept it to find out.”

When I left the Navy, I was electrician First Class and I was offered Chief if I reenlisted.  But I decided I’d like to come home.  I thought about reenlisting but didn’t.  Besides, I had Gerri waiting back home.  I would marry her when I got home.  Paul told Gerri (Borgmeyer), IF I come back, I’ll marry you.  I didn’t want to marry her and leave her.  They were married in 1946.  When Paul returned home, he became an electrician in Local 1 in St. Louis for fifty years.

Paul Meets Geraldine
Paul met Gerri in high school.  We came back in 1939 from Kansas. I was home about a month or so.  I was a freshman.  As I walked through the high school class, I was about that much (1’) higher than anybody else in the room.  I never seen so many short people in my life, Paul recalled.  And Gerri leaned over and said (to her friend), did you see that ugly looking character that is going to be in our class?  I fixed her!  I married her!  Gerri told her friend, “he looks like a Hoosier!”  She wasn’t real impressed the first time she saw Paul, his daughter-in-law Cindy recalls.  She hung around, Paul recalls.  They attended St. Peters High School which became into Duchesne High School.

After high school Paul got a job in a grocery store, set pins at night in a bowling alley, probably flunked a couple of courses because of setting pins and working at the grocery store.  Jimmy Wall was the guy that owned the grocery store.  When Gerri and her girlfriends would come by on Saturday night, I always had bag full of cookies ready.  Whenever they left, they’d pick their bag up.  The girls ate cookies from the Progress Grocery Store.  They sent cookies in a great big box.  Like an egg crate.  And they’d have cookies, and cookies, and cookies.  There was no way they could keep track of them, so I thought we were safe.  I think I’m safe! (Paul is 97).

Paul’s two brothers later enlisted in the Navy and joined the submarine service.  Donny was on the Trumpet Fish (launched May 13, 1945) and Ralph was on the Conger (launched October 17, 1944).  The war ended as Ralph made it through the Panama Canal and was about two thousand miles out in the ocean, when the war ended.  They turned around and came back.

Paul went on an Honor Flight in 2015 where he was greeted by two modern submariners eager to learn from a World War II submarine veteran.

Of the 263 submarines that made war patrols in WW2, 41 were lost to enemy action.
Another 11 were lost to accidents or other reasons.  This was nearly 1 out of 5 making the submarine service one of the most dangerous jobs in the service.

Curator’s note:  The Picuda sunk several warships.  The Japanese flag decal with rays on the side of the boat indicates a warship sunk.