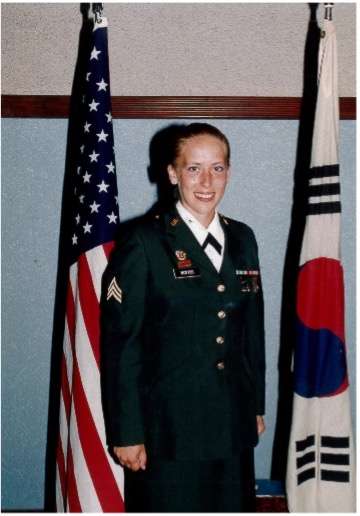 Editor’s note:  The story of this veteran’s experiences has been reported in her own words. This narrative contains brusque language, strong opinions and vivid recollections of some disturbing memories that might prove offensive to some readers.

Marie Peacock was born 5-MAY 1979.  She and her family lived in Ferguson MO.  She attended Incarnate Word Academy for two years and later graduated from McCluer High School in Florissant.  Angela entered the Army immediately after high school in 1998.Angie attended basic training at Fort Jackson South Carolina.  Her next stop was Advanced Individual Training (AIT) at Fort Gordon Georgia.  Her MOS was Multichannel Transmission System Operator.

Her first duty station was Korea.

In 2001, the twin towers in the World Trade Center were hit by terrorists.  Angie had been in the Army three years and was in Washington DC, very close to the Pentagon, in a meeting with the Army. “That day, I said, we’re going to war.  I just knew it.”

Angela would soon serve in Iraq.  Women “formally” were allowed in combat in 2013.

“It’s May of 2003, I am driving in a convoy from Kuwait to Baghdad. My family is watching it all back home on CNN and they have no idea. To many, our job looked relatively safe.  I ran convoys three times a week for six months.  We didn’t have any armor (body).  We have twelve pieces of armor for forty people.  So, you had to pick, did you want it in front or in back.  Of course, you are not really sure where you’ll get shot at that day.”

Since the War on Terror began in 2001, more than 132 women have died for our country. Most killed by IEDs. 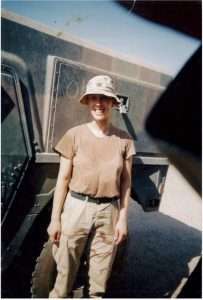 “No, I didn’t have to kill anyone, but the fear of thinking today could be my last, either from running over an IED, small arms fire from a sniper, a grenade being thrown from the overpasses was always there.”

For the rest of Angel’s story, click on the pdf below.

Angela also wrote poetry about her experiences in Iraq.  Click on the pdf below. 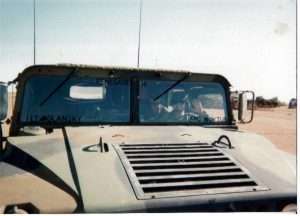