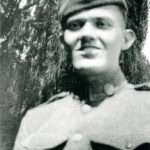 Jesse Otto Osborn, educator and scholar, was a member of the 3rdInfantry Division, 6th Engineer regiment, Company D.  He fought in, and was decorated for, the following battles: Champagne-Marne, Aisne-Marne, St. Mihiel, Somme Offensive  and Meuse-Argonne.

Osborn’s journal indicates that he arrived by ship at Sainte Nazaire in France on December 22, 1917. The last note in the journal indicates that his company was in Marseilles on May 27, 1919 waiting for one of the Italian ships which were returning American troops to the United States. He departed Marseille France May 30, arriving in Brooklyn New York June 14, 1919 aboard the ship Madonna.

On exhibit is PFC Jesse O. Osborn’s uniform, gas mask, and other items of equipment he used while in the Army, over one hundred years ago.

“Rock of the Marne”

The 3rd Division was activated on November 21, 1917 and saw combat in France on the Western Front.  One of the nicknames they earned was “Rock of the Marne” because of their stand in the Second Battle of the Marne. The3rd Division took the brunt of the Germans’ last offensive drive in the war. Their stand is considered one of the greatest in military history.

Born on October 15, 1894 in Lewis County, Kentucky, Osborn was the eldest of 11 children. His father was a blacksmith. He attended up to the fourth grade of formal education and then went to work in the tobacco fields. He qualified for admission to Berea College by an entrance examination when he was only fifteen years old. Berea College does not charge tuition. The students must work to pay for their education. He received his degree just in time to be drafted into the Army for World War I. After basic training he was sent to Europe. He served in several major battles and came home in 1919. Mae Brown, who he met while a student at Berea, was the daughter of a Civil War veteran, and had been recruited by the Army to type reports for several generals at the war office in Washington, D.C. They were married in Washington. He then attended to the University of Pennsylvania, received his Masters degree, and then attended Cornell University and received a PhD in Mathematics. He and Mae had three children, Clara Jean Musick, Joan Dunning and Robert Osborn.

During most of his professional career Dr. Osborn served as a Professor at Harris Teachers College in St. Louis. At Harris he taught mathematics to college students, many of whom, after graduation, became teachers in the public high schools and elementary schools of St. Louis. While teaching he also wrote numerous mathematics text books which were used in high schools and elementary schools throughout the United States.

Ada Kennan writes (2-1990): “One of Bob’s boys, Jesse Otto was very brilliant. He studied in spite of the family being poor and was a teacher in St. Louis in college or university. Jesse compiled a geometry book.”

Jeanie Hardyman wrote (2-24-1999): “Jesse Osborn really struggled to get an education, and that wasn’t easy in the area he lived. He went to Berea college and became a college professor of math in St. Louis. He also wrote several math books. I sent a picture of the old Brown County schoolhouse, and an article Jesse wrote about it, to the Historical Society in Vanceburg. They published it in their quarterly newsletter. He had a huge mansion-style house in St. Louis, with the lion statues on the steps, etc. During the depression, they bought rooms full of furniture to furnish their house, so it was full of antiques, from beds, bedding, to drapes, and what-nots, pictures, etc. His 2nd wife was really a collector of antiques. They took numerous trips, had a cabin in the Ozarks, took a trip around the world. Yet, they lived in simple quarters of the house. I think Jesse would just as soon have lived in the hills of Cabin Creek. He had a garden at his mansion, where he grew fresh vegetables, and even a tobacco plant. He was really proud of his vegetable garden. He also had some cats that adopted him and he liked them.

“Jesse’s sister (Ila) who lived in Maysville, kept him supplied with letters and newspaper clippings for years. We stopped to visit him several times on our way to Ohio, and always enjoyed our visits. Gene’s mom (Leona Osborn – another sister of Jesse’s) was mad at Jesse for some reason and wasn’t even corresponding with him. We made some tapes while we were at Jesse’s and let her listen to them. They touched her heart and she was reunited with her brother again. Once Jesse paid us what I thought was a high compliment, saying that he would like to have us for neighbors…from him, that was quite a compliment. One thing I am finding out about the Osborn’s is that they were very stubborn people. Once they make up their minds about something, they seldom change it!”