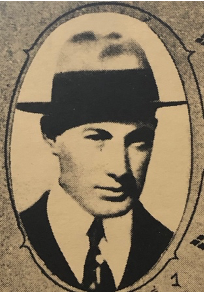 Ralph Edward Boschert was born 18-January 1891 in St Peters, Missouri. His father, William Henry Boschert was 32 and his mother, Sophia Linnebur Boschert was 28. He had six brothers and two sisters. He lived in St. Peters as a farmer working for his father.  According to the 1910 Census, the family lived on “O’Fallon-St. Peters Road.”  Ralph enlisted in the Navy and was sent to Great Lakes Naval Training Center for boot camp.

The virus traveled with military personnel from camp to camp and across the Atlantic, and at the height of the American military involvement in the war, September through November 1918, influenza, and pneumonia sickened 20% to 40% of U.S. Army and Navy personnel. The Army and Navy medical services may have tamed typhoid and typhus, but more American soldiers, sailors, and Marines would succumb to influenza and pneumonia than would die on the battlefields of the Great War.

The St. Louis Star and Times reported on 23-NOV-1918, “Ralph Boschert 22 years old son of Mr. and Mrs. W. H. Boschert of St. Peters died of influenza and pneumonia at the Great lakes Naval Training Station on Wednesday November 20, 1918.”  He was in basic training and the Navy for less than three months.

Ralph died 20-NOV-1918 at Great Lakes Naval Training Center in Illinois at the age of 22.  He is buried in his hometown of St. Peters in All Saints Cemetery.  To memorialize and remember Ralph Boschert, All Saint Church installed his name in a stained-glass window.

Ralph is honored and remembered at the St. Charles County Veterans Museum. We have limited information about Ralph Edward Boschert.  If you can contribute more information, please contact the museum.