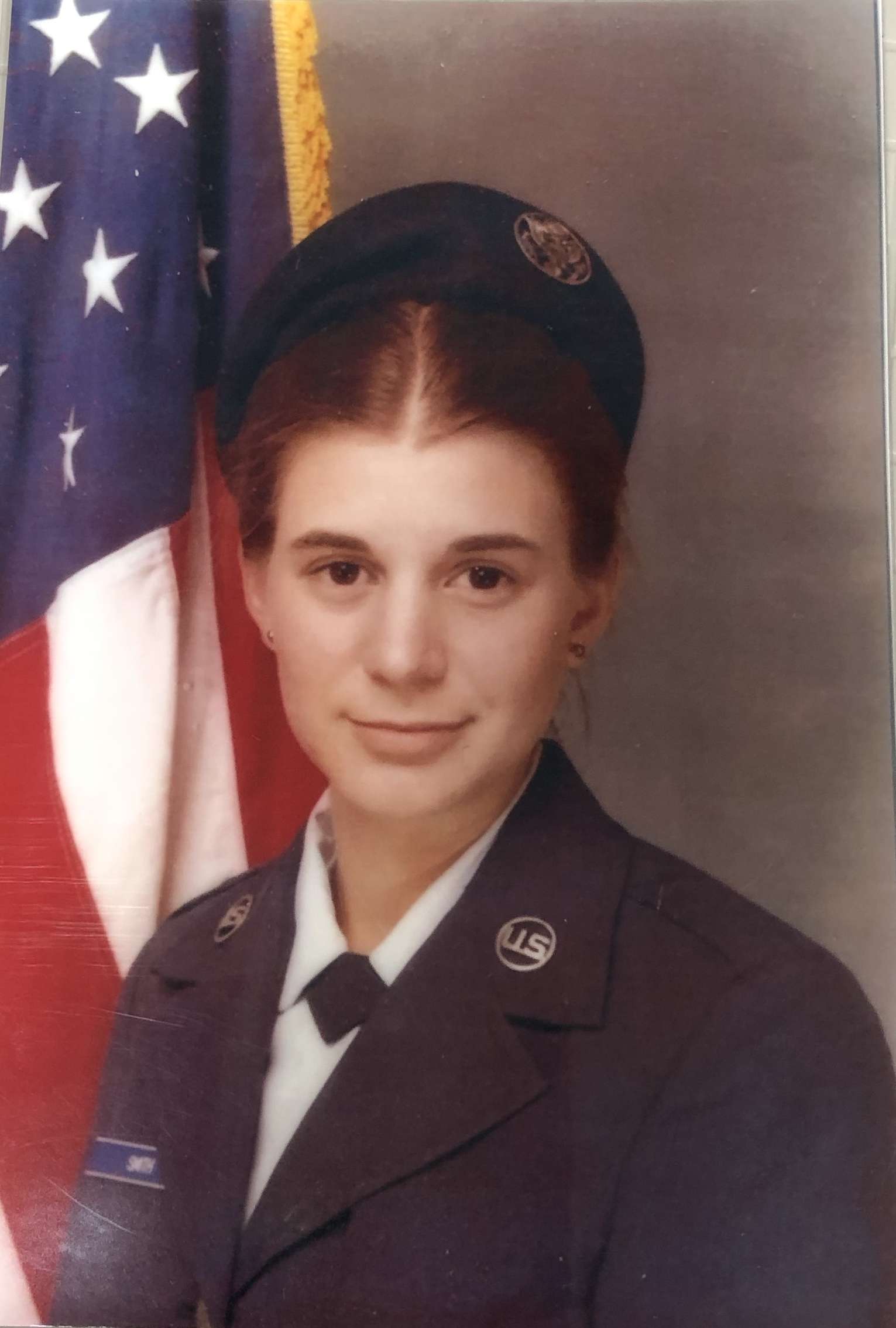 Renee discovered, “I didn’t know at the time, the Morse Code career field was being phased out due to the technology advances with computers.   I was then cross trained into 1C0U2 Aviation Resource Management. Aviation Resource Management personnel perform key ground coordination tasks related to crew, resources, scheduling and communications with other base agencies. My first duty base was Moody AFB GA where I was assigned for the 347th Tactical Fighter Wing Flight Records section. There I earned my three level (E-3).”

Renee was then transferred to the 69th Tactical Fighter Squadron in Squadron Operations. “I loved my job. It was so interesting, and I was able to travel the world in this career field. While on active duty I went temporary duty orders (TDY) many places including South Korea for participation in Team Spirit 1986 (Editor note: Team Spirit, joint war games an annual event since 1976). I also was under consideration for the Thunderbirds as the Aviation Resource Management specialist.”

Renee was honorably discharged on 9-MAY 1986. She went on to college earning bachelor’s degree in Elementary Education – Middle School with minors in Mathematics, Feminine Philosophies and Native American Studies.  In 1993 Renee moved to St. Louis and joined the Missouri Air National Guard on 22-MAR 1994.  Once again, Renee served in the 1C0U2 Aviation Resource Management field assigned to the 110th Fighter Squadron of the 131 Tactical Fighter Wing.

“Again, I found my place surrounded by my fellow military members and loved my job. I was a Traditional Guardsman where I earned my 5 level (E-5) and the rank of Staff Sargent. Again, my squadron went TDY all over the place but most importantly for Operation Provide Comfort to Turkey in 1995. I was Honorably Discharged from the Mo Air National Guard (MoANG) on 21-MAR 2000.”

Renee said leaving MoANG was bittersweet.  “The reason I left the MoANG I had graduated from college and was now teaching at Wentzville South Middle School. I was getting my master’s degree in School Counseling, was newly married to another Air Force veteran, Greg Essary.   I had just become stepmom to three boys. It was a bit overwhelming.   I made the decision to resign from the MoANG. This was the right decision for me at the time, but through the years I deeply missed my fellow veterans and the life of a military member.”

“In 2005 I resigned my teacher position and opened up my own business as an Allstate Insurance Agent. My agency is still in operation today and I am proud to say I employ two people and am able to provide them with a generous level of pay, great benefits and fun working atmosphere. As an Allstate Agent I have been recognized within the Agency Force for the last ten years as a Premier Agency and Honor Ring recipient.”

“While I love what I do now, I have always had that longing and missing for my fellow Veterans. I was asked to serve on the O’Fallon Veterans Commission and accepted that assignment, where I met Ralph Barrale Sr. Ralph had a dream of opening a St. Charles County Veterans Museum one day and asked if I would be his businessperson and treasurer. I accepted the role.  Of course, no one ever turned down Ralph Barrale.  I was a founding member of the museum and on the Executive Board. I am also the Treasurer. The museum officially opened in April of 2019.  I love connecting with veterans from all paths of the military and honoring them by sharing their stories.”