Robert Douglas Couture and “the best landing I ever made.”

Robert Douglas Couture was born 1-FEB 1924 in Rice Lake Wisconsin.  His parents were Wilfred (1894-1964) and Laura (Oleson) Couture (1896-1974). In 1930 the family lived in Chippewa Falls Wisconsin.  Robert had two sisters: Henrietta and Francis.  In 1940 Robert, 16, and the family lived in Rice Lake Wisconsin.  While attending high school in Rice Lake, he took a military aptitude test, and the results allowed him to become a pilot.  Robert graduated from Rice Lake High School in 1942, and enlisted into the Aviation Cadet program on 3-NOV 1943 joining the Army Air Corps.  For the next year, Robert was trained on several different types of airplanes as the military fast-tracked him along in a “hurry up” program.

On 6-JUN 1944, D-Day the squadron conducted patrols over Omaha Beach to protect the Allied assault on the beach from German aircraft. The next day 7-JUNE, the squadron set out on “search and destroy” missions during which they were ordered to stop enemy convoys from heading toward Allied positions on the Normandy beaches.  Bob’s wife Betty, later told us, he was instructed to “shoot anything that moves.”

The squadron ran into a German convoy and started its attack. Couture made two passes at the convoy and on his third pass his P-51 was struck by anti-aircraft fire. The fire had disrupted the airplane’s control system, and shrapnel struck Couture in his legs and in his head.  Robert flew the airplane as far away from the area as he could when he crash-landed on the hill near Vicheres. 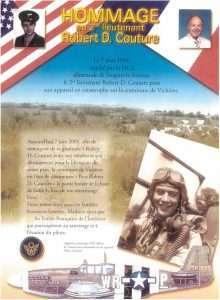 For the rest of Robert’s exciting story, click on the link below.