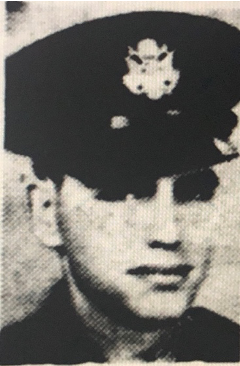 After the war, Robert attended St. Louis University for two years under the G.I. Bill of Rights.  Robert enlisted once again on 23-JAN-1949 in the Army and served in the 1st Infantry Division, 5th Calvary Regiment,  2nd Battalion as a 1st Lieutenant.  His occupational specialty was Field Communications Chief.

Robert was married to Billie Mae Rigg.  Robert and Billie had one son, Robert.  While Robert Sebacher was stationed in Korea, his wife Billie and son Bobby were living at Nagai Japan.  It was reported, his wife had not heard from him since the 1st Cavalry Division was dispatched to Korea early last month (APR 1950).   Robert J. Sebacher was killed in action on 5-SEP 1950 in South Korea at the Battle of Pusan.  Just a month before, he had been promoted to 1st Lieutenant.  Robert was 24 years old.

The Battle of Pusan Perimeter was a large-scale battle between United Nations and North Korean forces lasting from 4-AUG to 18-SEP 1950. The “Pusan Perimeter”was a 140-mile defensive line around the southeastern tip of the Korean Peninsula. It was one of the first major engagements of the Korean War.  An army of 140,000 UN troops, having been pushed to the brink of defeat, were rallied to make a final stand against the invading North Korean army of 98,000 men. At the end of the battle, each side had over 60,000 casualties, killed, wounded or captured.

From the Post-Dispatch 17-AUG-1950, On the Nakong River Front, Korea.  An American Lieutenant reports Communist troops are forcing captured United States soldiers to carry ammunition and supplies to the front lines.  Lt. Sebacher of St. Charles MO said the information was shouted by an American captive of the North Koreans while the Lieutenant and his men were hiding Tuesday on a nearby hillside.  He quoted the prisoner as yelling “We prisoners are getting plenty of food, water and rest but we have to carry ammunition for the North Koreans – the same ammunition they captured from us.  Lt. Sebacher, bearded leader of a mortar section, walked back to the American lines today with the remnants of his unit and that of another Lieutenant, tough veteran Stephen J. Gubenia of New York City.  Sixty Americans from Lts. Sebacher’s and Gubenia’s outfits were captured by about by about 200 North Koreans who attacked their position Northeast of Waegwan yesterday.  Lt Sebacher told the story of their capture emotionally – so emotionally he bit his lip occasionally to control his voice.

Lt. Seabacher said, “We had about 70 men in our position when the North Koreans crawled within 10 feet of our foxhole just before dawn.  They shouted, surrender or we shoot!  But we fought back.  When we rushed their position trying to break out of the trap, 15 or 20 of my men were captured.  Those of us that escaped later saw them being marched north by the Communists.  They are using our own shells against us.  Lt. Sebacher said, the only reason he could figure for letting the man shout to him from his hill was the North Koreans forced the captives to give the names of the men that escaped.

Lt. Sebacher said his men were carrying rifles whereas the Reds were carrying machine guns.  He said he believed the reds had enough strength to hold the prisoners but were wary about attacking again in a try for others.  Lt. Gubenia reported:  Thirty-eight of my men were captured.  They didn’t have a chance.

The North Koreans marched us six abreast until they were almost on top of us.  Then somebody blew a whistle and they split three ways to surround us.    My mortar crew tried to fight against machine guns with their carbines until our ammunition ran out.  Then the North Koreans captured our mortars and 200 rounds of mortar ammunition while we were getting back the hard way.  I saw the Reds march my men around a while then up into the hills.

With a catch in his voice, “They were the best mortar men I ever had.  Thank God they are alive even though they are now ammunition bearers for the enemy.  We will get through to them one of these days – and I hope it is soon.”

First Lieutenant Robert Sebacher of St. Charles who was recently reported as missing in action in Korea, has officially been declared dead it was learned yesterday from his parents Mr. and Mrs. Leo Sebacher 1207 Olive in St. Charles.  Mr. and Mrs. Sebacher received a telegram from the Defense Department which stated that their son had been killed in action September 5th the day on which he was reported missing.  His wife Mrs. Billie Sebacher and their 2-year old son are returning here from Japan where they had been living since April.