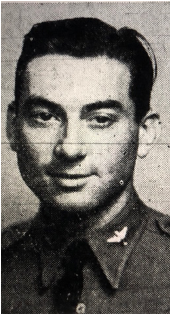 Robert enlisted in the Army Air Corp at Randolph field in Texas where after eight months in service he received an appointment to West Point Military Academy.  He was a cadet for two years before resigning to return to aviation at Kelly Field Texas.  Robert served as a flight instructor.

Robert was single, and his mother called flying, the love of his life.  In July of 1940, he resigned from the Army Air Corp to join the American Volunteer Group (AVG) 1st Squadron, the Flying Tigers. He sailed for China to guard the Burma Road for the Chinese Government.  The Tigers were paid $600.00 a month and $500.00 for each Japanese plane they shot down.

Robert’s P-40 Warhawk fighter plane was damaged when a Japanese flier committed suicide by crashing into the plane, striking the rudder while it was parked on the runway at Rangoon.  After the plane was repaired, Sandell made a test flight at which time the fatal crash occurred. The recently repaired plane shed its tail over Mingaladon airport near Rangoon, Burma. He was serving as a squadron leader in the Flying Tigers when he was killed on 7-Feb-1942.

Upon hearing the news, the Chamber of Commerce in St. Charles declared a street will be named for Robert in a Post-Dispatch article dated 28-FEB 1942.  “The street will be named for Lieutenant Robert J. Sandell, “The Sandy of the Burma Road (He was known to his squadron as Sandy) who was killed after downing seven Japanese planes.”  Robert was an “Ace” and posthumously awarded a British Distinguished Flying Cross

Robert’s mother, Mrs. Morgan B. Norris received the Cross from Lord Halifax (Edward Frederick Lindley Wood, 1st Earl of Halifax).  She told Lord Halifax that in combat over China her son who was a squadron leader, led a group that intercepted 10 Japanese planes, downed seven of them and crippled the remaining three (From St. Louis Globe Democrat and Associated Press 20-FEB 1943).  Mrs. Norris also received medals from the Chinese government forwarded to her by Brigadier General C. L. Chennault, Commander of the American Volunteer Group.  The medals were awarded to her son posthumously by the Chinese government in recognition of his heroism and courage.  Also forwarded to St. Charles was his trunk containing many personal effects and a large assortment of Chinese souvenirs and gifts which he intended to bring home.

The Monitor Newspaper (McAllen, Texas) reported, “Sandell killed in action in February, was included by the War Department in a list of ten members of the American Volunteer Group (AVG) decorated by the British air command in India for gallantry during operations in Burma.”

While serving with the AVG, Robert flew with other famous aces such as David Lee “Tex” Hill and Gregory “Pappy” Boyington (The Black Sheep).  Tex was a triple flying ace. He is credited with ​twelve and a quarter victories as a squadron leader with the Flying Tigers and another six as an officer in the United States Army Air Corps in World War II.  Boyington was credited with 4-6 victories as a Flying Tiger and twenty-six while serving with the Marines in World War II.  Tex Hill described Robert Sandell as a good pilot, and a huge loss for the squadron.

Robert is buried in Stroud, Lincoln County, Oklahoma.  Robert James Sandell is Honored and Remembered at the St. Charles County Veterans Museum on the Wall of Honor.