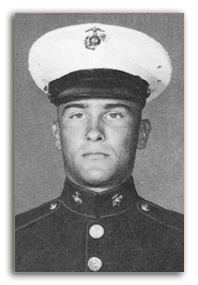 Robert John Wilkins was born on January 1, 1945. Robert lived in St Charles, in St Charles County.  He had enlisted in the Marine Corps and served during the Vietnam War. He had the rank of Lance Corporal and his specialty was Rifleman with the 3rd Marine Division, 2nd Battalion, 9th Marines, H Company.

Robert died through hostile action,  multiple fragmentation wounds on December 18, 1965. The incident occurred during an ambush near Ky Phu, South Vietnam, Quang Nam province.  Near the Da Dong Village, Company H was ambushed by a large enemy force employing small arms and mortar fire. During the first moments of the ensuing firefight, Corporal Wilkins was badly wounded in the foot and leg. Immediately he was directed to move to a helicopter landing zone on a hill not far from the scene of the fighting.

While waiting for evacuation he heard cries for help to bring up the other wounded. Ignoring the pain and despite instructions to remain at the landing zone, he made his way back down the hill to the scene of the bitterest fighting, a distance of 400 meters. Discovering that his mangled foot would prevent him from physically carrying the wounded, he got into position and gave covering fire for them and helped in carrying their gear back to the landing zone. On his second trip, he immediately went to the aid of a seriously wounded corpsman. While helping to carry the injured man to the landing zone, he was struck and fatally wounded.

By his initiative, heroic actions and devotion to duty, Corporal Wilkins reflected great credit upon himself and the Marine Corps and upheld the highest traditions of the United States Naval Service. He gallantly gave his life in the cause of freedom.

Robert John Wilkins is honored and remembered at the St. Charles County Veterans Museum on the Wall of Honor.