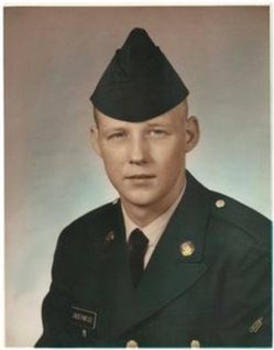 He lived in St Charles County in O’Fallon Missouri at 418 Prince Charles Drive.  He graduated from Ft. Zumwalt High School.  Robert Stephen Underwood served in the Army during the Vietnam War He began his tour on 15-JUN 1968 when he was 18 years old.  He had the rank of Private First Class.  His occupational specialty was Light Weapons Infantry.  Robert Served with 1st Infantry Division, 1st Battalion, 2nd Infantry Regiment, D Company.

Robert was part of a “recon in force” when they engaged in a firefight.  Underwood died through hostile action 23-AUG 1968 of multiple fragmentation wounds during the firefight.  The incident location was South Vietnam, Binh Long province.  He was in Vietnam 2 months, 8 days.

Robert was reported missing on 23-AUG 1968 and it was later changed to KIA on the same day.  His platoon leader, Lieutenant Lee F. Jones wrote in his report, “On or about 1400 hours on 24-AUG 1968, I did positively identify the bodies of two men;  PFC Patrick S. Hedernan and PFC Robert S. Underwood both of whom were assigned to Delta Company, 1st Battalion, 2nd Infantry Regiment, 1st Infantry Division.  Both men were Caucasian and were wearing “black scarfs” the unit’s identification and had First Infantry Division patches on their uniforms.  I did not identify the bodies by their identification tags because I knew both of them by sight.”