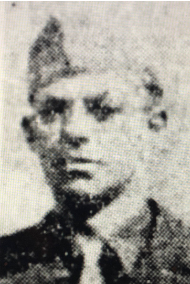 Robert W. Schuttenberg was born 21-MAR 1918 in Augusta MO.  He later moved to 706 Clark Street in St Charles.  His father was Robert William Schuttenberg (1889-1972) and his mother was Alma Maria Nolle Schuttenberg (1893-1980).  Robert had one brother; Raymond a Corporal in the Army and two sisters; Florence and Margaret.  Robert attended St. Charles High School and later worked at Stephen Brown Construction Company at a housing project in St Charles.  He enlisted 9-NOV 1942 at Jefferson Barracks.  Robert attained the rank of Staff Sergeant in the 454 AAF Bomb Group, 738th Bomber Squadron part of the 15th Air Force.  He was a bombsight specialist and had gone overseas in January.

The squadron was first activated as the 738th Bombardment Squadron in June 1943. After training in the United States with the Consolidated B-24 Liberator bomber, the squadron deployed to the Mediterranean Theater of Operations, participating in the strategic bombing campaign against Germany. It earned two Distinguished Unit Citations for its combat operations.  The 738th Bomb Squadron was part of the 454 Bomb Group.

Flying from Italy, the 454th flew 243 missions on over 150 primary targets in Italy, Yugoslavia, Austria, Bulgaria, Hungary, Rumania, France, Germany, Czechoslovakia, Greece, and Poland. The 454th participated in the drive to Rome, the invasion of Southern France, and the defeat of Axis forces in northern Italy. The 454th was awarded a Distinguished Unit Citation (DUC) for similar action on the high priority Messerschmitt Aircraft Factory at Bad Voslau, Austria on 12 April 1944.

S SGT. Robert W. Schuttenberg was killed when his plane crashed 14-SEP 1944 in Italy.  He was 26.  He is buried at Immanuel Lutheran Cemetery in St Charles.  The St. Louis Post-Dispatch reported 16-OCT 1944 Robert Schuttenberg killed in action 14-SEP 1944 in the Mediterranean area.

A memorial service was held 12-NOV 1944 at Immanuel Lutheran Church in St. Charles on Jefferson Street.