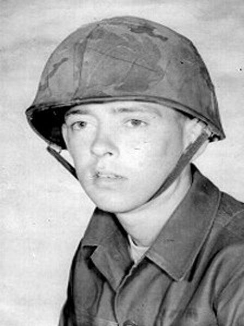 Robert “Bob” Wayne Swafford, was born on 6-APR 1944. Robert lived in O’Fallon Missouri at 1103 N. Main Street.  The family moved to O’Fallon MO. in 1962.  His father was Bradie Edgar Swafford (1921-2003) who served in the US Army during World War II.   His mother was Gloria “Dode” Shirley Steffen Swafford (1922-1997). Bob had five brothers; Larry, James, Steve, Mike, and Danny.   Five of the six brothers served in the military.  Bob had six sisters; Susan, Linda, Janice, Betty, Cindy and Tammy.  He attended McKinley High School in St. Louis before moving to O’Fallon in 1961.  Bon worked a few years before joining the Marines.

Bob enlisted in the Marine Corps in JAN-1965.  When several of Bob’s friends were sent to Vietnam, Bob volunteered.  He had the rank of Private First Class and his occupational specialty was Rifleman.  He served with 1st Marine Division, 5th Marine Regiment, 3rd Battalion, K Company.

Operation Swift was a military operation in the Vietnam War, launched by units of the U.S. 1st Marine Division to rescue two Marine companies which had been ambushed by the People’s Army of Vietnam (PAVN). The operation took place in the Que Son Valley, beginning on 4-SEP 1967.  The 1st Battalion Commander, sent 1/5 Marine Company B to assist Company D.  With Companies B and D heavily engaged, Companies K and M from the adjacent 3rd Battalion, 5th Marines were sent to relieve them. Ambushed and aggressively attacked, these two companies were also pinned down in separate enclaves by the early afternoon.  Marine artillery fire and Marine jet fighter-bombers prevented the Marine infantry companies from being overrun.  A fresh Marine company launched a dawn counterattack on 5-SEP forcing the PAVN to break contact.

With all engaged companies now relieved, the commander of the 5th Marines, ordered 1/5 and 3/5 to pursue the withdrawing PAVN, this officially began Operation Swift.  In the early afternoon of 6-SEP, two battalions of the VC 1st Regiment attacked Company B, the lead company of the 1/5 Marines. Company B was isolated and nearly overrun but held when Marine artillery rained tear gas around their position.  In the ensuing battles, 127 Marines and an estimated 600 PAVN were killed.

Robert W. Swafford was killed on 6-SEP 1967 through hostile action, rifle fire, gunshot wounds and fragmentation wounds from an explosive device while participating in Operation Swift.

Bob’s father followed the news of the war.  He was coming home from work on 6-SEP 1967 when he heard three men from St. Louis were killed that day in the region Bob was serving.  But the family didn’t hear anything from the Marines that day.  A few days later, Ed told Dode he was going to pay the utility bills and would stop for a beer at a tavern near City Hall.  As he entered the tavern, he noticed two Marines walked in behind him, and they asked the owner if a Mr. Swafford was there.   “I went to pieces because I knew then, he was dead,” Ed said.

The newspaper reported Robert W. Swafford was the third O’Fallon soldier to die in the Vietnam War.  In February, PFC William Willis Hood was killed.   In May, LCpl Ben Dominic Bono was killed. Colin “Keith” Hipkins (Company B) of Defiance was killed along with Robert Swafford (Company K) during the same operation (Swift), the same day.