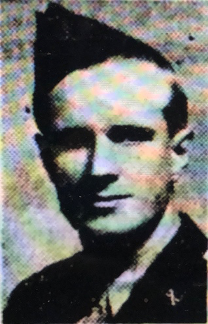 Roman Francis Grothe was born 5-NOV 1919 in O’Fallon MO.  He was the son of Mr. and Mrs. Frank Grothe 1300 N. Second Street in St. Charles.  Roman was the nephew of Isadore Grothe the former Sheriff of St. Charles County.  Roman registered for the draft on 1-JUL 1941.  He moved from O’Fallon and lived in St. Louis at 5603 Delmar and had a job as a restaurant cook at Cotner’s Sandwich Shop at 8200 North Broadway.

Roman was a Private First Class in the 24th Division, 13th Field Artillery Battalion.  The division landed at Mindanao (Philippines) on 17-APR 1945 and advanced across the island to Digos City until 27-APR.  They then stormed into Davao on 3-MAY and cleared Libby Airdrome on 13-MAY.

Although the campaign officially closed on 30-JUN, the division continued to clear up Japanese resistance during July and August 1945.  The Battle of Mindanao was fought 10 MAR – 15 AUG 1945 by the United States and allied Filipino guerrillas against the Japanese forces on the island of Mindanao in the Philippines as part of Operation VICTOR V. It was during the battle for Mindanao that Roman Francis Grothe was killed in action on  5-JUN 1945

We have limited information on Roman.  If you can share more information about him, please contact the museum.