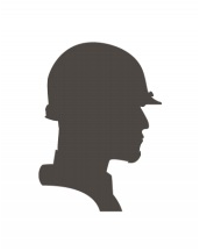 Paul Saale was in the 756th Tank Battalion.  The 756th was activated on 1-JUN 1941 at Fort Lewis, WA. The battalion first saw combat in 1943, when it deployed to North Africa on 24-JAN and then into Italy following the Salerno landings on 17-SEP.  In 1944, two companies of the battalion were re-equipped with DD tanks (Donald Duck) specialized M4 Shermans designed for amphibious landings. On 15-AUG 1944, they landed near St. Tropez as part of Operation Dragoon.  The 756th would serve with the U.S. 7th Army.

Often overshadowed by the Normandy Landings, the 7th Army amphibious invasion of southern France on 15-AUG 1944 and the ensuing operations were nonetheless critical to the Allied victory in the European theater of World War II.  The month of August cost the 756th nine officers, 32 enlisted personnel, 16 medium and two light tanks. Eight medium tanks and one light tank were knocked out by the enemy, the others were due to mechanical failure.

The month of September saw the men of the 3rd Infantry Division and attached units on constant move. The 756th mostly fired on columns of retreating German soldiers and helped the infantry capture objectives and towns on their dash towards Germany. The great advance of the 3rd Infantry Division and the 756th came to a halt around the town of Genevreuille when the advancing army met strong resistance.

Not only were the men of the756th fighting the Germans on their retreat, they were also fighting the weather. The month of September was miserable and wet. The terrain had turned from open and suitable for armored operations, to soggy, wooded, and hilly, forcing the tanks to stay on pre-existing roads rather than cross country.  The Germans took advantage of this disability. They mined the roads and used heavy artillery fire to slow the American advance.

October of 1944 played out much the same way as September had, with the 756th’s tanks supporting their respective units on their advance inland. They had made it to the town of Vagney before they were pulled out of the line on the 14th and sent back to St. Ames to refit.

Technician Fifth Class Paul Saale most likely was killed in battle around the town of Vagney on 13-OCT 1944.  He died of fragmentation wounds from an artillery shell. He was 22