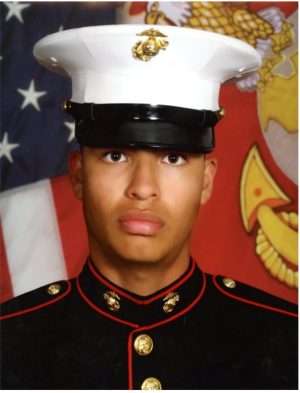 Cpl. Humberto “Bert” A. Sanchez was born 2-DEC 1998 in Logansport Indian.  His mother was Coral Briseño and his father was Humberto Sanchez.  He had one sister: Carol and two brothers:   Ariel Loran and Axel Loran.

Humberto Sanchez was a 2017 graduate of Logansport High School where he excelled in academics and athletics. “Bert” was well liked by his soccer teammates, classmates, coaches, and teachers.

After graduating, Bert enlisted and was assigned to the 2nd Battalion, 1st Marine Regiment, 1st Marine Division, I Marine Expeditionary Force, Camp Pendleton, California.  He was then called to serve as an Embassy Guard in Jordan before being reassigned to the Kabul airport.

He died after a suicide bomber detonated explosives outside Kabul’s Hamid Karzai International Airport Kabul, Afghanistan. 26-AUG 2021 in Kabul, Afghanistan.  He was 22.  Cpl. Sanchez was honored to serve his country as a Marine and the example of his willingness to make the ultimate sacrifice has made him a hero to his family, community, and the United States of America.

Bert Sanchez was likely awarded the following medals and ribbons:

He is buried at Mount Hope Cemetery in Logansport Indiana.