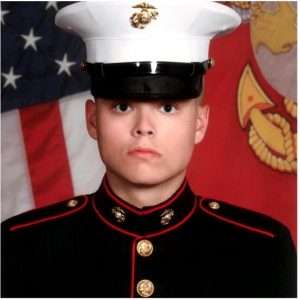 Jared thought about becoming a Marine at a very early age.  He decided on the Marines early in high school and opted for a delayed entry program at age 17. His father Mark Schmitz said. “Once he made up his mind, he made himself a regular at the Marine office in St. Peters and began training religiously with recruits even though he wasn’t yet enlisted.”

Jared began the 13-week Marine Corps Recruit Training at Marine Corp Recruit Depot San Diego on July 8; completed the Crucible and received his Eagle, Globe, and Anchor medal on September 20, and finally graduated on October 5, followed by School of Infantry West on 18-DEC 2019.

Jared was killed in a suicide bombing during the evacuation of Americans in Afghanistan. This was his first deployment.  Jared had only been in Afghanistan for two weeks.

It is likely Lance Cpl. Jared Schmitz earned the following medals and ribbons:

The soldiers killed in the attack were:

“No one is ever gone as long as someone still has memories of them.”