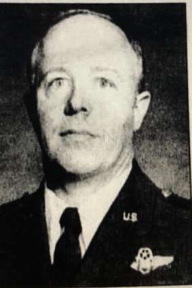 Stephen G. Schramm was born 21-MAR 1947. His parents were Elmer Wilbert Schramm (1921-1997) and Dorothy Gertrude Althage (1922- 1993). The family lived in Florissant and St Peters. He had no siblings. Stephen graduated from the University of Alabama in 1969 and enlisted in the Air Force. He married Cynthia Ann Collins on 7-JUN 1969. They lived in Birmingham AL with their two children, Kimberly and Jeff.

Lt. Colonel Stephen Gerald Schramm was a Vietnam Veteran. He served from 5-NOV-1969 to 21-AUG-1990. He flew approximately 260 missions in B-52’s as a navigator. He later served with 117th Tactical Recon Wing, Alabama National Guard and Air Force. He was deployed three times serving in the Persian Gulf. Stephen Gerald Schramm died in Saudi Arabia on 8-OCT 1990. He had been in Saudi Arabia for only three weeks. He was 43 years old.

An article appearing in the Post-Dispatch on 9-OCT 1990 reported: 10 killed in Gulf Training, Guardsmen, Marine Perish When Fighter, Two Helicopter Crash. (Editor’s note: the crashes were not related). The two men in the fighter were identified as MAJ. Barry K. Henderson, 40 from Tuscumbia, Ala a pilot and Stephen G. Schramm, 43 from Birmingham Ala, a navigator. A military spokesman said the crash was under investigation and could not provide any more details. They had ruled out hostile action.

From the Post-Dispatch newspaper on 12-OCT 1990: Fighter Crash in Gulf Claims Ex-St. Louisan. Stephen Schramm’s lifelong love of flying ended Monday in Saudi Arabia when his Phantom fighter crashed during a training mission. Schramm grew up in Florissant and attended Sacred Heart School there. He and his family lived on St. Anthony Lane until he was 11 years old, when they moved to Alabama. Schramm’s parents returned to the St. Louis area about 20 years ago. They live on Crescent Hill Drive in St. Peters. Elmer Schramm was a Navy fighter pilot in World War II, and Stephen was extremely proud of him. Elmer was based on an aircraft carrier.

His attraction to the open sky had its beginning at Lambert Field where some 35 years ago, Schramm’s father, hoisted his 8 year old son into the cockpit of a propeller-driven Navy trainer. The plane stayed on the ground, but flying was into his blood, said Schramm’s father Elmer Schramm of St. Peters. Major Stephen G. Schramm, 43 is the first serviceman with St. Louis roots to be killed in the deployment of U.S. troops in the Persian Gulf.

He is buried in Jefferson Memorial Gardens in Trussville Alabama.