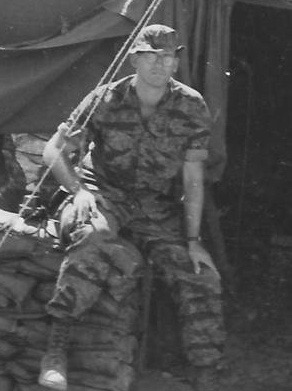 Charles Prevedel was born November the 18, 1943 to Frank and Sarah Prevedel of Blackjack Missouri. Charles graduated from Hazelwood Senior High School and studied mechanics at Ranken Technical Institute. He entered the Army in September 1965. Charles first tour of duty was in Korea. He was with the 197th Infantry Division Brigade from June through October 1967. After undergoing Special Forces training in 1967 and 1968, he was assigned to the 5th Special Forces Group in Vietnam in September 1968.

In February 1969 he was awarded a Bronze Star with the “V” for Valor. The medal was awarded for a December 1968 action in which he led a team that recovered the body of an Allied soldier, a member of the Special Forces of the Army of the Republic of Vietnam, while under fire.

On April 14, 1969, RECON Team 5 consisting of SGT Prevedel, SSGT Charles Newton, SPC Douglas Dahill and three Arvin (Army of the Republic of Vietnam) Special Forces went on a reconnaissance mission in Quang Nam Provence. The team conducted operations in that area for the next three days. On April 17th 206 hours, the team radioed that they were in a stream bed and under heavy fire and requested air strikes. Their location was then in Thua Thien Provence, 9 miles from Laos. An Air Force FAC (forward air controller) was dispatched but could not make radio or visual contact. At 1400 hours a thunderstorm and severe weather closed the area to all aircraft and prevented the insertion of a relief team.

Beginning the next day and continuing for a week, air and ground forces searched the area but found no trace of the men. In the days following, an enemy force was found with some of the type of clothing and weapons that SGT Prevedel’s team was using. A Viet Cong reported that in mid-May 1969 he had seen two U.S. POW’s in Quang Nam Province. The exact location was unspecified. The report was correlated to SSGT Newton and SGT Prevedel on the basis of time, location and compatibility of the physical descriptions. Four photographs from a Christmas 1969 film of POWs were correlated by CIA to Charles Newton and one to Charles Prevedel. There had been no further information to surface about Dahill. Prevedel was officially listed as missing in action on September 25, 1969. In September 1978, the three missing Green Berets were declared killed in action, body not recovered based on a presumptive finding of death.

By 1989 nearly 10,000 reports had been received by the U.S. Government related to Americans still missing in Southeast Asia. Many authorities believe there are still several hundred Americans still alive in captivity. Charles Prevedel’s father died in 1988 never knowing if he faces in the Christmas film were his son and his partner or an uncanny coincidence.

In 1991 Vietnam returned one tooth, uniform parts and a small quantity of human remains that were purportedly associated with the three missing servicemen. The bone fragments could not be identified since DNA testing was not perfect at that time.

On September 20, 1991 the ARPERCEN Building (Army Reserve Personnel Command Center) at 9700 Page Avenue (on the site of the old military records center), was named the Charles F. Prevedel Federal Building.

On October 3, 2011 it was ascertained that the remains and bone fragments along with a pair of glasses found in 1991 belonged to SGT Charles Prevedel. DNA testing also confirmed the discovery of SPC Douglas Dahill and SSGT Charles Newton. The remains of SGT Prevedel along with Dahill and Newton were honored at Arlington National Cemetery.