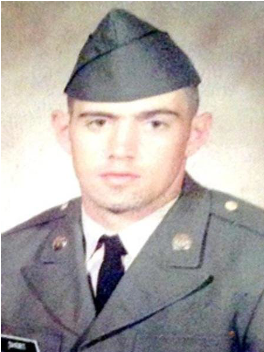 Billy Dale Short was born 2-SEP 1947.  His father was Mr. Cecil Leon Short.  His mother was Peggy Duggan Edwards.  He was the stepson of Darleen Bessie Kaiser Short (1931-2003).  He had three siblings.  Two brothers; Randy, Terry and Dale and one sister; Vicki.  Billy was married to Patricia Nichols.  They had two children; Billy Dale Short Jr. and Patty Ann Short.  They lived in O’Fallon MO in St. Charles County.  He was drafted into the Army in SEP 1968 and served in Vietnam. He began his tour on 5-JUN 1969. He had the rank of Specialist 4. His occupational specialty was Light Weapons Infantry and he was part of a sniper team.

Billy Dale Short was awarded a Bronze Star for Merit and a posthumous Purple Heart.

Billy Dale Short. Specialist 4th Class of 2239 South Grand Blvd has been killed in Vietnam it was reported today.  He was 22 years old.  Short, the husband of Mrs. Patricia Short was killed 10-5 when he stepped on a mine in a combat zone in Vietnam.  He had been a rifleman and part of a sniper team.  He was born in St. Louis and drafted in September 1968.  He had been in Vietnam since last June.  Before entering the Army, he was a waiter at the Sure Way Sandwich Shop, 2300 South Grand Blvd.    Burial will be at Boss Missouri Cemetery.