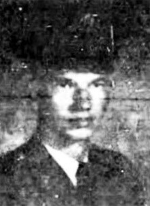 Charles F. Smith was born 5-FEB 1948. His mother was Cora Smith who had moved to Albuquerque New Mexico. He had two brothers; Robert and James and two sisters; Betty and Virginia. Charles was married and lived in St. Charles with his wife Clydene and their two children; Tammy and Keith. Smith enlisted in the Army and served during the Vietnam War. He began his tour on October 4, 1970. His rank was Warrant Officer. His occupational specialty was Helicopter Pilot, serving with the 498th Medical Detachment 67th Medical Group, 44th Medical Brigade (Air Ambulance).

From official reports: At approximately 1945 (7:45pm) on 26 October 1970 while at LZ Uplift, an urgent request was received at Dustoff/Medevac from Forward Support Base Washington, a mountain top artillery base at an altitude of 1,400 feet, concerning a seriously injured soldier. Even though the base was covered in clouds, fog, light rain and darkness, Don (Donald R. Cook), as Aircraft Commander, volunteered to go and get the soldier and was airborne within two minutes of the call. Flying UH-1H-BF, Iroquois, tail number 67-17765, Don attempted to reach the base with a crew of four and one observer from the west, but due to lack of visual references to the ground he aborted and moved over to the east. While hovering up the eastside, he requested the base maintain constant illumination on the mountainside via 81mm mortar aerial flares during his approach. At within 150 meters of the base, illumination was lost due to a dud round, another round was immediately fired, but it too was a dud and Don lost all visual reference of the mountainside. He attempted to turn right away from the mountain when his Iroquois lost altitude. The left skid caught a tree causing it to nose forward and slamming it into a large rock formation. Don and two members were thrown out as it rolled two or three times down the mountain and came to rest on its right side between another rock formation and two large trees. The observer on the mission crawled from the wreckage as sole survivor right before it burst into flames with the crew chief still aboard.

Charles left behind a wife and two small children. He was in Vietnam just 22 days. Charles Franklin Smith was awarded an Air Medal. He is buried at Springfield National Cemetery in Springfield, MO.