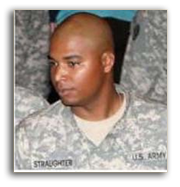 He enlisted while living in St. Charles, Missouri.  Matt joined the National Guard as a combat engineer in December 2005.  Before deploying to Iraq, Matthew served on Operation Jump Start, the border security mission in Arizona from November 2006 to June 2007.

Operation Jump Start was a military operation to aid U.S. Customs and Border Patrol, announced by President George W. Bush in May 2006. The mission entailed the deployment of United States National Guard troops along the Mexico–United States border for purposes of enforcement of border security and construction of a border fence. Military operations with Operation Jump Start were primarily to observe and report. The rules of engagement for the operation were very restrictive and only allowed escalation to lethality when met with an equal amount of force from another. The US military set up entry identification team sites to spot undocumented aliens. Many of the areas of operation were in desolate locations; some locations were so remote that troops were sometimes flown in by UH-60 helicopter.  During that assignment, Matthew assisted in patrols and basic border protection.

Matthew was mobilized in July 2007 for Operation Iraqi Freedom.  He was assigned to the 1138th Engineer Company, 107th Engineer Battalion, 35th Engineer Brigade from Fort Leonard Wood.  They were based at Camp Liberty near Baghdad in Iraq.

His unit, called SAPPERS were assigned to locate improvised explosive devices and maintain traffic flow along military supply routes near Bagdad.  The company conducted more than 500 missions on some of the most dangerous roads clearing more than 30,000 kilometers of the city.  They found and destroyed over one-hundred explosive devices.  Straughter and the 1138th potentially saved countless lives by reducing the threats to both troops and civilians.  SGT Matthew Straughter’s vehicle was hit by a rocket-propelled grenade in Baghdad.  He later died of his wounds on 31-JAN 2008. Matthew was awarded a Bronze Star and Purple Heart.

Matthew Straughter is honored and remembered at the St. Charles County Veterans Museum on the Wall of Honor.