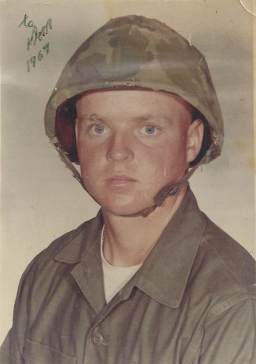 Steven John Reichardt, was born on 4-JUN 1948.  His father was Charles Edward Reichardt (1916-1984) and his mother was Venita Kuchler Reichardt.  He had four brothers; Daniel, David, Stanley and Michael.  He had one sister Gina.    Steven lived in St, Charles MO.  He enlisted in the Marine Corps and began his tour in Vietnam on 26-FEB 1968. He had the rank of Private First Class. His occupational specialty was Rifleman. Served with 3rd Marine Division, 2nd Battalion, 26th Marines, H Company.

On 13-SEP 1968 3/3 Marines was replaced 2nd Battalion, 26th Marines which sent out rifle companies north of LZ Margo. On 16 September the 2/26 Marines was ordered to prepare for airlift from Margo and the rifle companies were ordered back to the landing zone. That afternoon the command post at Margo was hit by over 150 rounds of mortar fire resulting in 21 U.S killed and 135 wounded. Two hours later a further mortar attack resulted in 1 U.S. killed and 11 wounded and the following day another mortar attack resulted in 1 U.S. killed and 16 wounded. LZ Margo was within range of heavy weapons situated within the Demilitarized Zone, and while counter-battery artillery and air strikes were used against the NVA artillery they were less than effective in knocking out guns emplaced in caves and tunnels.  Thirty Marines are known to have died at LZ Margo. Among them Pfc Steven J. Reichardt

He died of multiple fragmentation wounds, artillery rocket mortar while in a defensive position on 17-SEP 1968.  The incident location was near Margo Cam Lo River Valley West of Cam Lo, South Vietnam, Quang Tri province.  Steven is buried in Oak Grove Cemetery in St. Charles, MO.  He was in Vietnam for about seven months.

The picture above was Steve in Boot Camp.  The writing in the top left says, “To Mom 1967.”