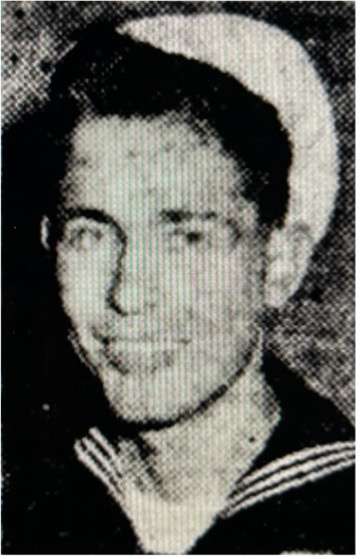 Alvin Joseph Tenholder was born 23 MAR 1924 in Saint Louis, MO.   Mm1 Alvin Joseph Tenholder died 18 Dec 1944.  Lost at sea on the USS Hull when sunk by typhoon Cobra.  Alvin service number was 3376744.  His father was Henry Tenholder (1883-1958) and his mother was Caroline “Lena” Nenninger Tenholder (1884-1941.  In December 1944, the destroyer USS Hull (DD 350) was operating as part of the Fast Carrier Strike Force in the Philippine Sea. On December 17, the Hull was participating in refueling operations when the ships of its fueling group were engulfed by Typhoon Cobra. The Hull lost its ability to steer amid the enormous waves and began taking on water. The Hull eventually took on too much water to stay afloat and rolled and sank shortly before noon, on December 18. Sixty-two crew members were rescued, but a little more than two-hundred crew members were lost in the sinking.  Three destroyers capsized and sank with hundreds of lives lost. The sea claimed 765 Third Fleet sailors in all. Four light carriers were badly damaged, along with another four escort carriers. A light cruiser was mauled; as were seven fortunate destroyers, that weathered the storm; two destroyer escorts; a fleet oiler; and a fleet tug. More than 200 planes were lost from the decks of Third Fleet carriers. Of the tragedy, Admiral Nimitz said, “it represented a more crippling blow to the 3rd Fleet than it might be expected to suffer in anything less than a major action.”

Machinist’s Mate First Class Alvin J. Tenholder went down with the ship on 18-DEC 1944, and his remains were not recovered. He is memorialized at Manila American Cemetery in Manila, Philippines.