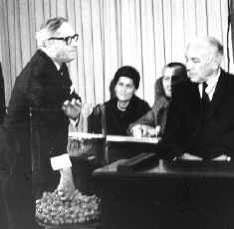 The first Draft Lottery since 1942 was held on December 1, 1969, at Selective Service National Headquarters in Washington, D.C. This event determined the order of call for induction during the calendar year 1970.  Registrants birthdays for those born between January 1, 1944 and December 31, 1950 were drawn.

There were 366 blue plastic capsules containing birth dates placed in a large glass container and drawn by hand to assign order-of-call numbers to all men within the 18-26 age range specified in Selective Service law.

With radio, film, and TV coverage, the capsules were drawn from the container, opened, and the dates inside posted in order. The first capsule – drawn by Congressman Alexander Pirnie (R-NY) of the House Armed Services Committee – contained the date September 14, so all men born on September 14 in any year between 1944 and 1950 were assigned lottery number one.  The drawing continued until all days of the year had been paired with sequence numbers.

Would you have been called to report?  The table contains an Administrative Processing Number or APN.  The APN highest number called for a physical in the first lottery was 195.  If your number was over 195, you were not called.

MOST men remember their number to this day.