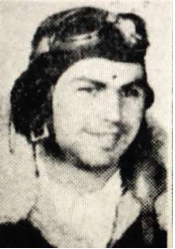 Tierney, James R. was born 17-AUG 1922. He lived at 1206 Shawmut Place in St. Louis MO. James parents were Loyola Herbig Tierney (1891- 1963) and James W. Tierney (1892-1926). He had two brothers; John and William and one sister; Delores. Tierney was employed by Monsanto Chemical before joining the service. He was a Marine Aviation cadet. Tierney died 13-OCT 1944 when the plane he was piloting crashed in the Escambia River near Bogia Florida near Pensacola FL. His mother, Loyola was notified of his death by his older brother, Lieutenant William I. Tierney, an instructor at the base. His brother John was a SGT in the Army at the time. His death was listed as a died non-battle death (DND). James R. Tierney is buried in Calvary Cemetery in St. Louis MO.