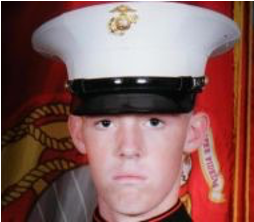 Philip Vinnedge was born 2-22-1991 in Spokane WA.  The family later moved to St Charles.  His parents were Dave and Julie Vinnedge.  He had two brothers; Corey and Jason.  He graduated from Francis Howell Central High School in 2009 and attended Lewis and Clark Technical School while in high school.

Vinnedge tackled everything with a special focus: Boy Scouts, wrestling, skydiving, welding, trap shooting. They said, he displayed the same drive as a Marine.

Philip was part of combat operations in Helmand province, Afghanistan. It was his first deployment and he had been there for only two weeks.  The four Marines were killed by an improvised explosive device, roadside bomb while they were conducting mounted operations.

The other three Marines killed: