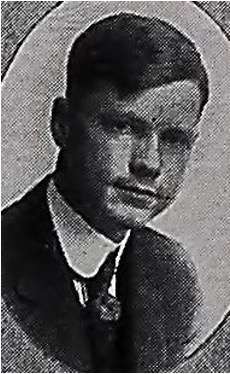 Robert M. Walker was born 2-NOV 1895 in Wentzville MO. His parents were Charles J. Walker (1846-1916), a former Senator) and Harriet “Hattie” Ficklen Shore Walker (1856-1901). He had two sisters: Harriet, and Mary. He had four brothers: Charles, Benjamin, Thomas. The family moved to Columbia MO. in 1900. Robert graduated from the University of Missouri in 1916 with a degree. He enlisted in the Aviation Corp in 1917 just after war was declared. 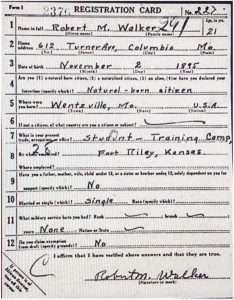 He was training at Scott Field in Belleville until he was transferred to Kelly Field in San Antonio. There, he was commissioned as a Lieutenant and became an instructor. He was highly commended for his skill and caution as a flier.

“On 7-AUG while flying on an instruction flight, the student lost control of the machine. Robert was able to gain control and effected a safe landing, but due to a mechanical problem, the plane bounded up about 50 feet and fell. The student was unhurt, but Lieutenant Walker received fatal injuries, a fractured skull. He was unconscious Thursday night and died on Saturday 10-AUG 1918. His brother Lee was with him when he died.”

Robert had a broken and arm and a head injury.  According to a newspaper report, “He was expected to live, but died three days after the crash.”  Cause of death was listed as “Fracture, base of skull.”  Military funeral services were held at Kelly Field. After the services in Texas, his body was accompanied home to Wentzville. The Wentzville Union reported a flyover was to occur during the services, but “because of some mistake, didn’t get any further than O’Fallon.” Another newspaper reported, “two airplanes from Scott Field dropped roses on the casket.”