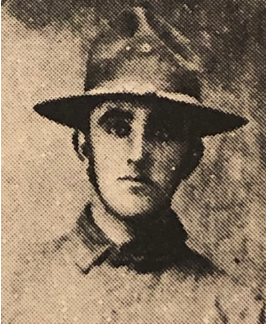 Peter entered the service 19-AUG 1917.  Peter went overseas on the troop ship Carpathia bound for France on 6-JUN 1918. He served with Company B, 314th Engineer Battalion, 89th Division.  He was in the first draft contingent from St. Charles County MO.

The St. Louis Post-Dispatch reported 2-DEC 1918 that Peter Westhoff was wounded severely on 2-NOV 1918.  The War Department notified his parents.  Peter would later die in field hospital 2-NOV 1918.   He was 23.  Private First-ClassPeter Westhoff was the first soldier killed in action from our area during World War I. Peter died only nine days before the Armistice.  Peter Westoff is buried in his hometown at Assumption Church Catholic Cemetery in O’Fallon MO.

Peter Westhoff participated in these battles: Lucey Sector, St. Mihiel Off, Euvezrin Sector, and the Meuse-Argonne Offensive.  Peter was killed during the Meuse–Argonne offensive.  The offensive was a major part of the final Allied offensive of World War I that stretched along the entire Western Front. It was fought from 26-SEP 1918, until the Armistice of 11-NOV 1918, a total of 47 days. The Meuse–Argonne offensive was the largest in United States military history, involving 1.2 million American soldiers. It is the second deadliest battle in American history, resulting in over 350,000 casualties including 28,000 German lives, 26,277 American lives and an unknown number of French lives.

Camp Westhoff was constructed at Bitburg Germany by 314th Engineers with Army of Occupation in honor of PVT. 1st Class Peter A. Westoff.

Peter A. Westoff is honored and remembered at the St. Charles County Veterans Museum.