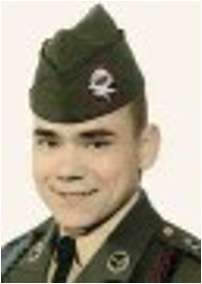 Elvin graduated from Holy Family elementary school and earned his high school diploma while serving in the Army.  He married Joanne Coleman.  They would have two children.

Elvin served in 5/7th Cavalry, A Company which was formed as part of a brand-new battalion to fill out the 1st Air Cavalry Division’s 3rd Brigade. At this stage in the Vietnam War, most soldiers During this time in Vietnam Elvin was trained in airmobile infantry tactics, and they became what was known as “sky troopers.”  Before departing for Vietnam, Elvin and A-Company soldiers were given a two-week pass to return home.

Elvin began his tour on 2-AUG 1966 the entire newly formed battalion left Fort Carson in buses for San Francisco Bay and the U.S.N.S. Gaffey.  There the approximately 2000 soldiers aboard including Elvin and the 180 troops of A Company aboard the ship bound for Vietnam.   On 20-AUG 1966, the U.S.S.N Gaffey docked at Qui Nhon arrived in Vietnam.  The men were transported in deuce-and-half to Camp Radcliff in the heart of the Central Highlands.  The battalion base camp would be located a couple of miles from the village of An Khe.  It was said, whoever controlled Highway 19, controlled the Central Highlands of Vietnam.  Alpha Company like most infantry companies was comprised of three rifle platoons and one mortar platoon.  Much of a platoon’s time would be responsible for guarding a checkpoint along Highway 19.

For the rest of Elvin’s story, click on the link below.