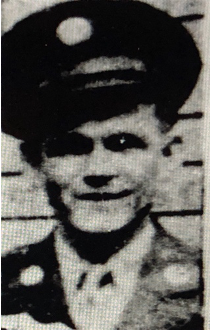 Wilbert Irvin Merx was born 13-OCT 1920. His father was Irvin Edward Merx (1890-1950) and his mother was Elizabeth R. (Elsie) Fisher Merx (1891-1972).  Wilbert worked at American Car and Foundry (ACF).  He lived in St Charles at 901 Madison Street.  He had four sisters; Laverne, Lilian, Viola and Dorothy.  He was a Sergeant in the Army, 91st Infantry Division, 363rd Infantry Regiment.  The 91st Division was famously nicknamed the “Wild West Division.”

During the month of September the 91st·Division fought its most brilliant campaign, in which it smashed the most formidable defensive positions in Italy, the Gothic Line. It advanced through elaborately constructed fortifications over mountainous terrain made hazardous by rain and fog, with unflinching determination and unwearying courage.

According to one infantryman the climactic days, SEPT 12-22, were a “lifetime of mud, rain, sweat, strain, fear, courage, and prayers.” But with brilliant leadership and magnificent courage, the 91st Division cracked the Gothic Line and established itself as one of the great fighting Divisions of World War II.  It was during the fierce battles on 14-SEP 1944, Wilbert was killed in action.  He was awarded a Bronze Star.

Wilbert I. Merx is buried or memorialized at Plot A Row 8 Grave 20, Florence American Cemetery, Florence, Italy. This is an American Battle Monuments Commission location.

Wibert I. Merx is honored and remembered at the St, Charles County Veterans Museum.