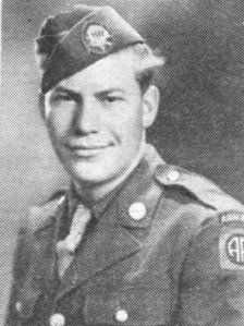 Wilford Dixon joined the service 5-DEC 1942 and left for overseas duty in May 1943. Wilford “Rippy” Dixon was a paratrooper in the 82nd Airborne, 504th Parachute Infantry Regiment.  He was a Technician Fifth Class, U.S. Army.  He has one brother in service, Pvt. Wilbern Dixon, who is stationed at Ft. Lewis, Wash.

Wilford Dixon was wounded in action on 8-FEB 1944 in Italy but recovered and rejoined his unit in England.  The War Department notified his mother who lived at 119 McDonough Street.  Wilford rejoined his unit in time for Operation Market Garden.  Operation Market Garden opened with Allied success all round. In the first landing, almost all troops arrived on top of their drop zones without incident. In the 82nd Airborne Division, 89% of troops landed on or within 1,000 meters (3,300 ft) of their drop zones and 84% of gliders landed on or within 1,000 meters (3,300 ft) of their landing zones.  To their north, the 82nd arrived with a small group dropped near Grave securing the bridge. They also succeeded in capturing one of the vitally important bridges over the Maas-Waal canal, the lock-bridge at Heumen.

On 20 September the 3rd Battalion of the 504th commanded by Major Julian Cook was ordered by General Gavin to make an assault across the Waal River and secure a crucial bridge.  With artillery support the first wave of the 504th assaulted, in twenty-six assault boats, under intense fire, taking 200 casualties in the process. Finally on D+4 the 504th finally secured their hold on the bridge, fighting off another German counterattack just before noon.

Sergeant Clement Haas recalls the Waal Crossing.  “A whistle blew and we ran our boats down to the water.  Lieutenant Magellas, Dixon (Wilford), Zimmerman and myself.”  Private John Schultz wrote, “I was on a boat with the 60 mm mortar squad and Wilford Dixon was right beside me.  About halfway across he was hit in the head and died immediately.  When we reached the other side, we headed for the bridge.  It was then we discovered we didn’t have the barrel for the mortar.  I was sent back to get it.  Our boat was still there.  I removed the barrel from Sergeant Dixon’s body and headed back to the squad.

Tec5 Wilford N. “Rippy” Dixon was 23 years of age and had a fiancé, Mavis.