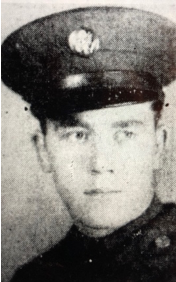 William E Robinson was born in 1921. He previously lived in Lincoln County, Missouri. His father was Mr. Loren Earl Robinson and his mother was Mrs. Haiden Robinson who lived in Machens Missouri (a now extinct town at the head of the Katy trail) in St. Charles County.  He had brother J. W. Robinson, a Sergeant that also served.  William enlisted 11-SEP 1940 and was a Private First Class in the US Army, 1st Armored Division, Artillery, 6th Infantry.

The 6th staged at Fort Dix, New Jersey, on 8-APR 1942, for a departure to Ireland on 31-MAY from the Port of New York. They arrived on 11-JUN and then prepared for their entry into North Africa. They landed on North Africa on 21-DEC 1942 during Operation Torch.  The purpose of “Torch” was to hem Rommel’s forces in between U.S. troops on the west and British troops to the east.

Operation Torch brought in thousands of British and American forces. The amphibious landings would involve a total of about 110,000 troops, most of them Americans.  They landed across western North Africa, and joined the attack, eventually helping force the surrender of all remaining Axis troops in Tunisia in May of 1943 and ending the Campaign for North Africa.

William is honored and remembered at the St. Charles County Veterans Museum.

We have limited information about William E. Robinson.  If you have more information, please contact the museum.