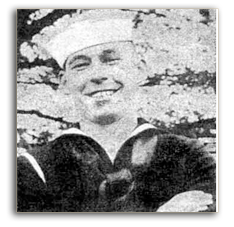 William Edward Vierling was born on June 28, 1921.  William was a resident of St Charles and St Charles County.  He had enlisted in the Navy in about 1938 and served during World War II.  His rank was Petty Officer First Class and his occupation or specialty was Motor Machinist’s Mate First Class. William served on the USS Argonaut (SS-166).

Vierling was reported missing and ultimately declared dead on January 10, 1943. Recorded circumstances attributed to: “Missing in action, lost at sea.”  The Argonaut was sunk by surface attack and depth charges near Rabaul while operating in the area southeast of New Britain during her third patrol.

Argonaut (Lieutenant Commander J.R. Pierce) intercepted a Japanese convoy returning to Rabaul from Lae, on 10 January 1943. A U.S. Army plane which was out of bombs saw one destroyer hit by a torpedo, saw the explosion of two other destroyers, and reported five other vessels in the group.  After a severe depth charge attack,  Argonaut was forced to surface and the destroyers, according to the plane’s report, circled and pumped shells into her bow, which was sticking up at a considerable angle. Further efforts to contact Argonaut by radio were fruitless. It is quite certain, then, that Argonaut met her end in this action. Japanese reports made available since the end of the war record a depth charge attack followed by artillery fire, at which time the “destroyed top of the sub floated.”

On the basis of the report given by the Army flier who witnessed the attack in which the Argonaut perished, this ship was credited with having damaged one Japanese destroyer on her last patrol.  William Edward Vierling and the crew is memorialized at Tablets of the Missing at Manila American Cemetery in the Philippines.

William Edward Vierling is honored and will always be remembered in the St. Charles County Veterans Museum.  His dog tag hangs on the Wall of Honor at the museum.

Five St. Louis men perished on the Argonaut. The Post-Dispatch reported on 16-JUN 1943 that the Argonaut “accepted destruction rather than surrender.”  The article went on to say, the Navy Department “paid high tribute to the courage and self-sacrifice of the Argonaut men.”

The St. Louis men who perished on the Argonaut included:

For more information about the Argonaut, click on the pdf below.