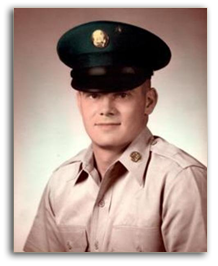 William Willis Hood was born 11-JUN 1947. He lived in O’Fallon Missouri and attended Fort Zumwalt High School.  William was drafted into the Army in 1966.  Private First-Class Hood began his Vietnam tour on 14-JAN 1967. He was attached to the Army’s 1st Infantry Division, 1st Battalion, 16th Infantry Regiment, Company B. His specialty was Light Weapons Infantry.

William’s regiment participated in Operation Junction City.  Operation Junction City was a military operation conducted by United States and Republic of Vietnam forces beginning on 22 FEB 1967.  The stated aim of the nearly three-month engagement involving the equivalent of nearly three divisions of U.S. troops was to locate the elusive headquarters of the Communist uprising in South Vietnam, the Central Office of South Vietnam.

It was the largest airborne operation of the Vietnam War.  The VC, highly mobile and elusive, with information sources imbedded deep in the South Vietnamese bureaucracy, had already moved their headquarters to nearby Cambodia.  They  launched several attacks to inflict losses and wear down the Americans. On 28 FEB 1967 there were engagements with U.S. forces at the Battle of Prek Klok in the Tay Ninh Province.  The US, supported by powerful air strikes and massive artillery support repulsed the VC attacks.  It was during this engagement William Willis Hood was killed in action.

He was the first soldier from O’Fallon Missouri killed in the Vietnam War. He was 19 years old.  He was killed, along with 25 other soldiers in the engagement.  In addition to the 25 killed, 27 were injured. William was only in Vietnam one and a half months when he died.

William Willis Hood is buried at St. Charles Memorial Gardens in St. Charles Missouri.  He left behind  his mother Fredia L. Seward and sister Vanessa.  Vanessa would write on Memorial Day in 2012, “I sit remembering all the great times we had growing up. You were the very best big brother a sister could have. I love you so much. I also remember the day you left to go to Vietnam and the day that the men in uniform came to our door wanting to talk to Dad and Mom. It is as real today as it was then.”

William Willis Hood is honored and remembered at the St. Charles County Veterans Museum on the Wall of Honor.