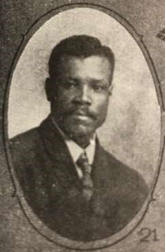 Walter Williams was born 11-OCT-1886,  in Gilmore (an old town outside of Wentzville).  His mother was Elvira.  His draft card lists his occupation as laborer, and his address as 1313 N. 4th Street in St Charles MO.  Williams entered the service 1-JUN-1917.  He was a Private in Co 27 163rd Dep Brigade.  In June 1917, the 163rd Depot Brigade was formed at Camp Dodge. The brigade was the base unit for the 88th Division, which processed new draftees and provided basic training.

More than 350,000 African Americans served in segregated units during World War I, mostly as support troops. Several units saw action alongside French soldiers fighting against the Germans, and 171 African Americans were awarded the French Legion of Honor.

Walter died at Camp Dodge Iowa on 11-OCT-1918 of influenza.  We believe with a great deal of certainty; Walter is buried in Grant Chapel African Methodist Episcopal Cemetery in Wentzville.  NOTE:  The date of birth seems off by one year versus tombstone. Limited information about Walter Williams is available.   If you have more information, please contact the museum.