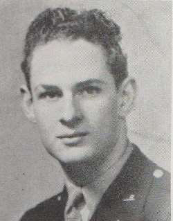 Willard B. Wilson Jr. was born in 1920. His father was Willard B. Wilson (1894-1953) and his mother was Verna Wilson (1894-1975). He had one sister; Betty Gayle. They lived at 1525 Clay Street in St. Charles MO. The newspaper call Willard a star athlete at St. Charles High School. Willard graduated from the United States Military Academy at West Point where he played guard on the varsity football team. He attained the rank of 1st Lieutenant. He was a Student Officer Air Corps Reserve.

St Louis Globe Democrat reported: “Former St Charles High School athletic star reported missing July 29 on a routine training flight from Maria Field Texas is dead, according to his parents. According to the commandant, he was the pilot of a four-engine plane which took off at 0800 and failed to return within the scheduled 3 hours. He was due to get his wings next month. The body was found by a ranch hand beside the wreckage of his plane.”

From St. Louis Globe Democrat 31-JUL 1943: “1st Lt Willard B. Wilson pilot of an Army bomber based at Marsee Field Texas has been missing on a routine flight from the field since Thursday his parents Mr. and Mrs. Bruce Wilson 1525 Clay Street have been informed by the War Department. He had received bomber pilot training in California. He was 23. He died 29-JUL 1943. His death certificate says, “decapitation compound fracture of all long bones, 3rd degree burns.”

Willard B. Wilson is buried in Oak Grove Cemetery in St Charles.