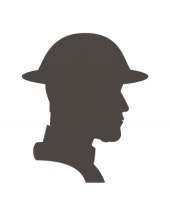 Winkle, Edward J. was born 7-OCT-1890.  He lived at 1620 N. 3rd Street.  His mother was Sarah Margaret “Maggie” Winkle (18681932) and his father was Robert Winkle (1864-1928).  According to the 1910 census, Edward had six brothers; Theodore, Joseph, Charles, William, Stephen, and Frederick.  He had one sister; Mary.  On his draft card his occupation was listed as unemployed. Winkle was drafted and left St. Charles with a contingent of 113 men from St. Charles on 26-MAY 1918 for Camp Funston.  After basic training, Edward boarded  the troop ship Olympic on 9-AUG-1918.  He was promoted to Corporal in the 349th infantry Regiment, Company C, 88th Division.  Edward was in combat at the Battle in the Vosges Sector.

From the Post-Dispatch 3-NOV 1918: died from pneumonia in France 7-OCT-1918.  Edward Winkle died on his birthday.  He was 28 years old.  He is buried in St Charles Borromeo Cemetery. Note:  Sadly, several family members are buried in the same cemetery with little information.  It is believed his mother Margaret (Maggie) and brother Joseph are buried there.