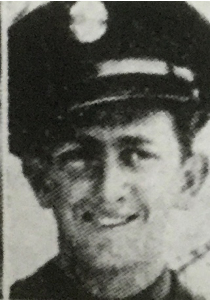 By the end of FEB-1944, Allied forces had gained control of the Marshall Islands in the western Pacific Ocean and moved on to the Marianas, where 20,000 U.S. troops, by far the largest force used in a Pacific operation thus far put ashore on Saipan on 15-JUN. After fierce resistance by the Japanese, Saipan was declared secure on 9-JUL; the neighboring islands of Tinian and Guam were under American control by late August.

The next objective for Admiral Chester Nimitz’s Pacific Fleet was the Palau Islands in the western Carolines, 500 miles east of the Philippines.  Peleliu–a volcanic island just six miles long and two miles wide–was held by a garrison of more than 10,000 Japanese troops. The island’s airfield would allow Japanese planes to threaten any Allied operation in the Philippines, and General Douglas MacArthur pushed for an amphibious attack in order to neutralize this threat.

On the morning of SEP-15, the 1st Marine Division landed on the southwest corner of Peleliu. U.S. forces had refined their amphibious strategy over a year of hard fighting, and by this time had it down to a science: Massive naval bombardment of land-based targets preceded troop landings, which were supported by strafing and bombing runs by carrier-based aircraft. The troops arrived on shore in waves, gathering on an island’s beaches until they had sufficient numbers to push inland. These methods had worked in earlier landings and were expected to work again on Peleliu.

However, the Japanese had learned from past attacks, however, and they took a new strategy, aimed at bogging the enemy invaders down for days and inflicting massive casualties in hopes of pushing the Allies into a negotiated peace. Peleliu’s many caves, connected by networks of tunnels, allowed the Japanese to hunker down and emerge mostly unscathed from the Allied bombardment. They held out for four days before U.S. forces were even able to secure the southwest area of Peleliu, including a key airstrip. When the Marines turned north to begin their advance, they were targeted along the way by heavy artillery fire and a fusillade of small arms from Japanese forces installed in caves dug into the rocky surface of Umurbrogol Mountain, which the Marines dubbed “Bloody Nose Ridge.” Over the next eight days, U.S. troops sustained about 50 percent casualties in some of the most vicious and costly fighting of the Pacific campaign.

Meanwhile, the U.S. Army’s 81st Infantry Division had secured Angaur and Ulithi, also in the Palaus, relatively quickly. Members of the 321st Regiment (and later the 323rd) were sent to aid the 1st Marine Division, arriving in time to make a renewed attack on Bloody Nose Ridge from the west on September 24. While the combined Army and Marine forces were able to envelop Japanese positions on the mountain, the Japanese still held out, and would only be dislodged after much bloodshed throughout October.

From 12-OCT through 15-OCT, when elements of the 321st Infantry began moving up to relieve Marine units, there was little action at the Umurbrogol Pocket beyond the clearing of the ridges overlooking West Road.  Up until the 15th, the 321st Infantry had spent its time mopping up at northern Peleliu and on the offshore islands already seized and had taken a few more islets off Ngesebus and Kongauru.  At northern Peleliu, debris was cleared, defenses were constructed, roads and trails improved, and enemy dead buried.

On 12-OCT the 1st Marine Division was relieved of all responsibilities other than continuing the fight in the Umurbrogol Pocket. The 321st Infantry took over the defenses along the eastern arm, while the Island Garrison Force assumed responsibility for the area south of the pocket.

Offensive operations against the Japanese remaining in the Umurbrogol Pocket were resumed about 1500 hours on 16-OCT, when elements of the 2d Battalion, 321st Infantry, made an attempt to move from their new positions on Hill 140 across a deep draw to Brother No. 1, the northernmost of the five peaks on Five Brothers Ridge. The intent was to secure a position for supporting weapons and observation in preparation for a general attack south by the 1st and 2d Battalions, 321st Infantry, on the morning of 17-OCT. The plan for the latter day was to have the 1st Battalion push south along the broken ridges west of Hill 140 while the 2d Battalion seized Five Brothers. The rest of the reinforced regiment was to hold its positions and provide fire support whenever possible.

At midafternoon on the 16th, one platoon of Company G, 321st Infantry, went down into a deep ravine between Hill 140 and Brother No. 1. The platoon expected to receive ire support for its attack up Brother No. 1 from Company F, which was located on a ridge immediately west of Hill 140, but once in the ravine the platoon was met by strong enemy machine gun and rifle fire originating at positions in defilade from Company F’s supporting weapons. The Company G platoon soon suffered casualties which included the company commander, who had gone forward to direct the attack. The platoon had to be withdrawn, leaving behind some dead and wounded who could not be brought out until after dark and then only by individual acts of heroism. During the night Japanese troops, either foraging for food or trying to harass the American lines, were active all along the Umurbrogol front. In retaliation and in preparation for the next morning’s attack, American artillery and 4.2-inch mortars placed intermittent fire on known or suspected enemy positions and also employed area fire.

On 26-OCT control of further operations against the Umurbrogol Pocket passed from the 321st and Colonel Dark to 323rd Regiment Col. Arthur P. Watson commanding.  To that date the 321st Infantry had lost 146 men killed and 469 wounded on Peleliu including Ross Wulfekammer.