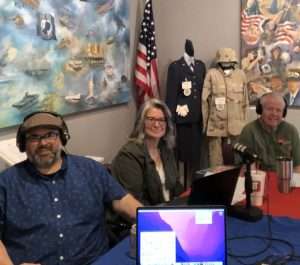 Welcome to the Dog Tag, Episode II, Season 1, a podcast by the St. Charles County Veterans Museum.  Our podcast airs on Tuesdays, at 6:00 PM.  This week’s show features exciting stories of local veterans told by two of the founding members of the museum. We will walk you through some of the exhibits and stories starting with World War I through present day.

These are real stories of local heroes that served our country.  Renee and Jim explain the rich history of the county.  As you enter the museum, you see a replica of a War of 1812 Fort (Zumwalt).  Back then, St. Charles County was the “wild west” complete with Indian uprisings. One of our famous early settlers was Daniel Boone.   The county was very conflicted during the Civil War with both sides trying to gain control.

In the World War I exhibit, you see many handwritten letters and documents along with “sweetheart art.”  Soldiers would craft and shape empty shell casings or parts of enemy planes into jewelry, picture frames, or a vase for parents or loved ones.

We have a large photograph on the wall in our Korea exhibit of the landings at Inchon Bay.  The photograph shows U.S. ships and supplies stuck in the mud as the tide drastically shifted out.  You’ll see the story about PFC Albert Koch of the 1st Cavalry who boarded a Japanese Ferry, the Toya Maru, and was hit by a typhoon with 118 miles an hour winds.  The ship sank with more than 1,000 people losing their lives.  Of the 57 Americans on board including soldiers, women, and children, only one soldier survived.  These stories in Korea remind us, we were fighting “Mother Nature” as well as the North Koreans and Chinese.

United States Marine Corporal James Club and his wife Judy exchanged over 500 letters while he was in Vietnam mostly on pink paper.  While James safely returned home to Judy, many friends were not so lucky. Jim explains his feelings through his letters.

The art of letter writing is vanishing.  Through letters, we learn, the veteran’s hopes and fears.  We preserve the veteran’s stories through their letters.

You’ll read the story of Combat Medic Master SGT Matthew Sims who earned three Purple Hearts on one Deployment.  You’ll also read letters from thankful parents and fellow soldiers thanking him for opportunity to raise a family because of Matt’s devotion to saving lives.