Welcome to the Dog Tag, Episode IV, Season 1, a podcast by the St. Charles County Veterans Museum.  Our podcast airs on Tuesdays, at 6:00 PM.  This week’s show features Bill Fisher.

Bill had a belief that serving your country was important. After briefly considering joining the Marines, and amidst strong opposition from family, Bill settled on the Air Force.  Bill was stationed at Pease Air Force Base for five months after joining.   While there, Bill volunteered for Sentry Dog School. Bill had become good friends with a guy at Pease Air Force Base who accompanied him to Sentry Dog School. Bill said, “We knew by volunteering for Sentry Dog School, we were also volunteering for Vietnam.” Dog handlers were in high demand in Vietnam and Bill was assigned to Phan Rang Air Base in Vietnam. Bill served in the 35th Security Police Squadron. Phan Rang was located about 6 miles inland from South China Sea and about 90 miles north of Saigon.  When I got to Vietnam, there was extensive dog training. The dogs were being trained, handlers were trained with the dogs, and there was sentry training.  The combat training was how to engage the enemy and succeed in a combat situation. Bill continued, “by succeed, it didn’t necessarily mean survive. Of course, that is what you always want, but your objective is to neutralize the enemy.  Bill served a harrowing nine months from February 1967 to November 1967 as a dog handler in Vietnam. 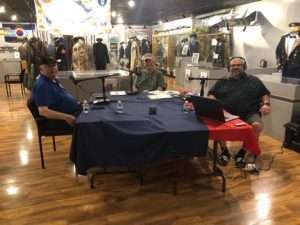