Today’s podcast features LTC Steve Brown, retired.  Steve flew the Caribou, and B-52’s in Vietnam.  After Vietnam, Steve joined a very elite group of pilots flying the U-2 over hot spots around the world.

Lt. Colonel Steve Brown served twenty-three in the Air Force as a pilot from 1968-1991, Steve had a very distinguished career in the Air Force. As a new pilot he paid his dues flying a Caribou carrying everything from ammunition, supplies, troops to livestock in Vietnam.  He graduated to B-52’s flying bombing missions during Operation Linebacker II.  Negotiations for peace talks had bogged down, President Nixon ordered the bombing of Hanoi.  Operation Linebacker II was important because it forced the communists back into serious peace negotiations. 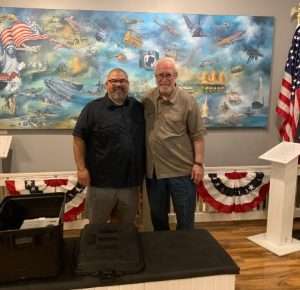 After Vietnam, as the cold war intensified, Steve sat on the tarmac on alert in the cockpit of his B-52 armed with nuclear weapons.  From B-52’s Steve joined a very elite group of pilots flying the U2 reconnaissance plane.  Dressed in a astronaut suit, armed only with a camera, Steve would fly over cold war hotspots shooting pictures.

To listen to the podcast, click on the link below.