Angela Peacock joined the Army immediately after high school in 1998.  Angie was strong, tough and a born leader.  She was ready, willing, and able to do anything a man could do. After a stint in Korea where she was assaulted, Angie was deployed to Iraq in May 2003.  She began driving supply convoys in an area known as the Triangle of Death.  The routes in the triangle were very dangerous and soldiers got killed there all the time.  They said, No women in combat? No front lines for women?  Baghdad was the front lines!

Angie was sexually assaulted and harassed while serving her country. The DOD says 1 in 4 women are severely sexually assaulted and more than half report experiencing harassment.  Not what any women signs up for.  Angie wound up thousands of miles from home, staying in a homeless veterans’ shelter, attending a three month Renew Program for women veterans who have experienced Military Sexual Trauma with Post-traumatic stress disorder.

Today, Angela is the subject of a film, Medicating Normal. With a Masters in Social Work from Washington University in St. Louis, Angie is part of the film’s outreach team for the film, facilitating discussion of the film’s issues for communities worldwide.

Angie, welcome to the show! 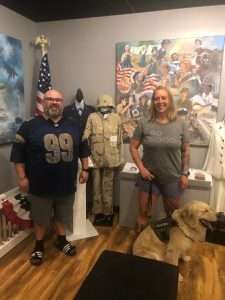 Click on the link below to listen to her podcast.