The Korean War was fought from 1950 until 1953 and pitted the United States, South Korea, and their UN allies against North Korea and the Chinese Communists. The invading North Korean troops were able to capture Seoul within three days—the first of four times that city would change hands—and quickly pushed their opponents back to the so-called Pusan Perimeter in the extreme southeastern portion of the peninsula. The tide turned that September due to a surprise amphibious landing that General MacArthur executed behind enemy lines at Inchon, the port for Seoul. When U.N. troops then pushed deep into North Korea, rumors began to swirl that they would be home by Christmas.

When China entered the war in October on the side of North Korea, American troops began the longest retreat in U.S. military history.  The U.S. troops were never able to recover.  The Korean War was one of the deadliest wars in modern history with nearly 40,000 US soldiers killed and another 100,000 were wounded.

Our guests are Terry C. Bryant the State Korean War Association Commander and United States Marine Veteran Harry Hope who was at the Chosen Reservoir along with our host Jason Galvan. 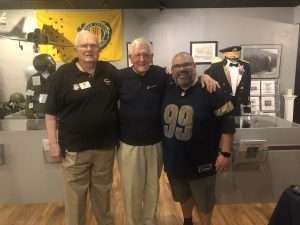