In late January 1968, during the lunar new year – the Tet holiday – North Vietnamese, and communist Viet Cong forces launched a coordinated attack against dozens of targets in South Vietnam. The first phase of the assault began on January 30th, when National Liberation Forces (NLF) simultaneously attacked multiple targets in heavily populated areas and places with heavy U.S. troop presence. The NLF even managed to breach the outer walls of the U.S. Embassy in Saigon. The strikes on the major cities of Hue and Saigon had a strong psychological impact, as they showed that the NLF troops were not as weak as the President Lyndon Johnson’s Administration had previously claimed.

The U.S. and South Vietnamese militaries sustained heavy losses before finally repelling the communist assault. At the end of the Tet Offensive, both sides had endured losses, and claimed victory. 31-JAN 1968 was the deadliest day ever in Vietnam when 246 troops were killed.   Overall, there were 1,580 U.S. casualties including 526 killed and 1,364 wounded.  In addition, the South Vietnamese suffered 2,214 casualties including 384 killed and 1,830.

The U.S. and South Vietnamese military response nearly eliminated the NLF forces and regained all the lost territory. At the same time, the Tet Offensive weakened domestic support for the Johnson Administration as the graphic, real-time reporting on the Tet Offensive by the U.S. media made clear to the American public that an overall victory in Vietnam was not imminent.

Walter Cronkite, American broadcast journalist often cited as “the most trusted man in America” after being so named in an opinion poll, reported from his anchor desk in New York,

“It seems now more certain than ever that the bloody experience of Vietnam is to end in a stalemate.  It is increasingly clear to this reporter that the only rational way out then will be to negotiate, not as victors, but as an honorable people who lived up to their pledge to defend democracy and did the best they could.” 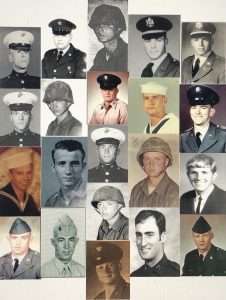 It was the first war in which the U.S. failed to meet its objectives.

It was also the first time America failed to welcome its veterans back as heroes.