It was an honor to visit with Sandi Rimpson the other day.  Sandi is the niece of one of our heroes in the museum.  Her uncle was Wilford N. “Rippy” Dixson.  Rippy was a paratrooper in the 82nd Airborne, 504th Parachute Infantry Regiment.  His battalion was assigned the crossing of the Waal River at Nijmegen.  Rippy was killed in action during the crossing along with 47 men in his battalion. The 1977 film “A Bridge Too War” depicts Operation Market Garden and the Crossing of the Waal River. Their objective was to take the Waal Bridge intact. 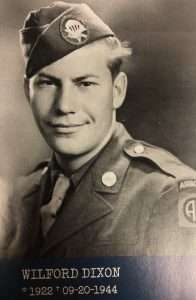 Today a new bridge built in 2014 stands in the same spot and is named “De Oversteek” which means “The Crossing” to honor Rippy and his 47 comrades that died during the crossing.

Here the 48 Americans killed crossing the Waal River on 20-SEPT 1944 are memorialized.  Every night at sunset since 2014 one or more veterans walk the bridge at the same pace as the lighting of the 48 streetlights spanning the bridge. The Forty-eight streetlamps illuminate in slow succession in honor of the 48 men who gave their lives to seize the bridge from Nazi control.  Veterans come from all over Europe to participate in the slow “Veteran Walk” across the bridge. 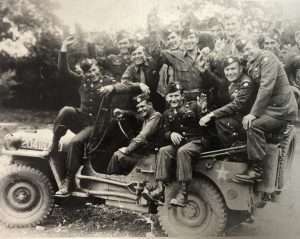 Rippy is seated on front left of Jeep 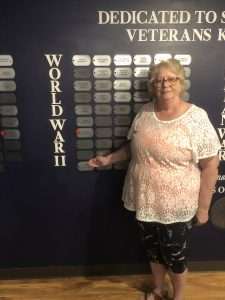 Sandi gave us a book titled, THE CROSSING – a Dutch Tribute to 48 American War Heroes.  The book includes a short biography about her uncle that will allow us to enhance his story in the museum.