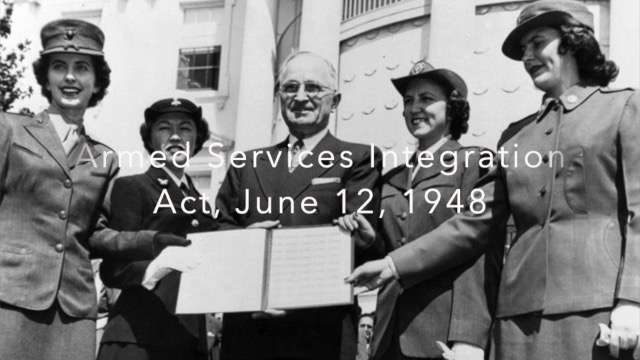 Did you know that June 12 is designated as Women Veterans Day? The first Women Veterans Day was held June 12, 2018, marking the 70th anniversary of the groundbreaking Women’s Armed Services Integration Act, signed into law by President Harry S. Truman on June 12, 1948.

While many women would prefer to being thanked for their service on Veterans Day, we believe it is important to honor the women who paved the way. During World War II, approximately 400,000 U.S. women served in support positions with the military, and nearly 500 were killed by enemy fire.

After the end of the war, the military sought a peacetime draft to increase the size of its branches, which had shrunk in size after the war ended. Knowing that enacting a draft so soon after the entire nation had lived through a war would be unpopular, politicians realized that half of the population was willing but unable to serve. For this reason, the Women’s Armed Services Integration Act was enacted, effectively giving women the right to serve as military members and making them deserving of full recognition as veterans.

Throughout the years, women’s roles have continued to grow in all branches and phases of military operations. Now, they serve freely alongside men in any branch or role they desire. Today, women make up 20% of new recruits, 16% of personnel serving on active duty, and 19% of the National Guard and reserve forces. Without their dedication, perseverance, and commitment, we would not enjoy the freedom we have today.